What engraving is that? 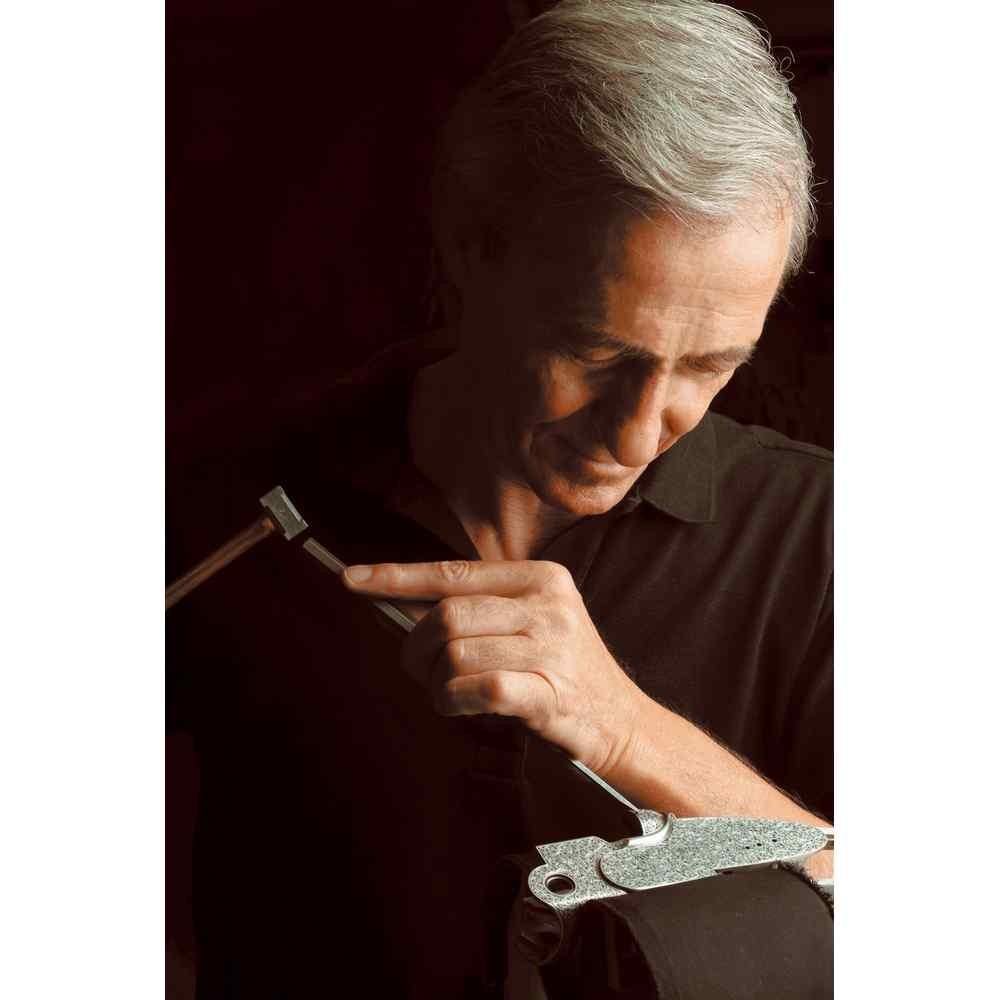 ver looked in detail at the engraving on your gun? Nearly every shotgun has engraving of one type or another so we look at some of the processes involved.

The engraving on any shotgun varies on its pattern, depth and overall quality depending mainly on the price point in which that particular gun sits. It can often be purposeful such as indicating a manufacturers name or model name, or largely decorative on game guns of varying grades. These decorative engraving patterns fall into one of two main categories being either gamescene or a scroll pattern. 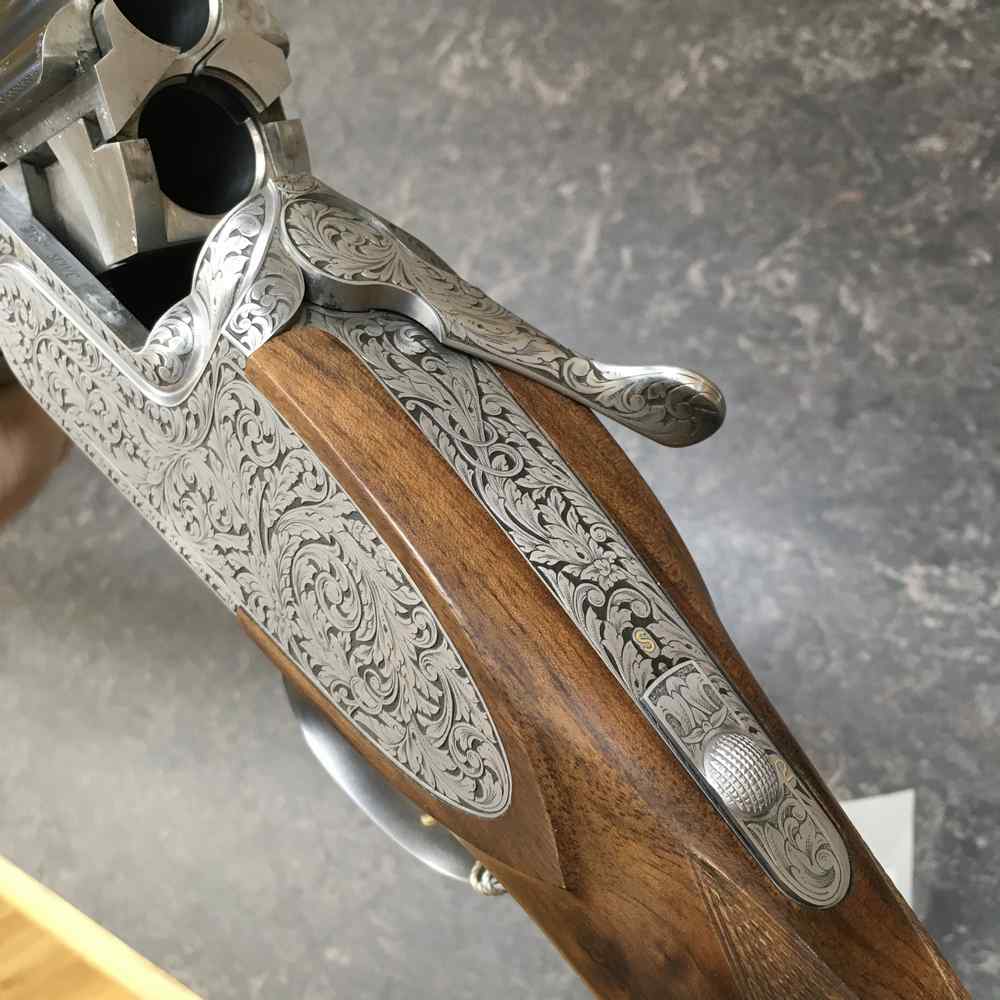 Scroll engraving always give a gun a real timeless and traditional look as it has been around for many years. The pattern itself can vary hugely from a very fine and tightly wound scroll, through to the larger and bolder floral patterns. A scroll engraving will almost always be identical on the right and left hand sides of the gun with a fully complimentary bottom plate to match. Even a gamescene engraved action will nearly always have some elements of scroll work within it to further compliment the pattern and make it truly complete.

A gamescene is an engraving which is very personal to the owner and one which has so many variations. Species wise Pheasant, Partridge, Grouse, Woodcock and Duck are among some of the options with Dogs and general hunting/shooting scenes can often be depicted. A gamescene can sometimes be in a Vignette style. This is where the subject(s) are framed in a bubble like surround which in itself can be surrounded by a scroll pattern.

So what type of engraving will we see on guns of different price points? The process and therefore details present will very much depend on this. On a entry level gun the engraving pattern will be embossed straight onto the action in one go, giving an acceptable level of detail at a competitive price point. Some good examples would be the Kofs and entry level Beretta and Browning models. 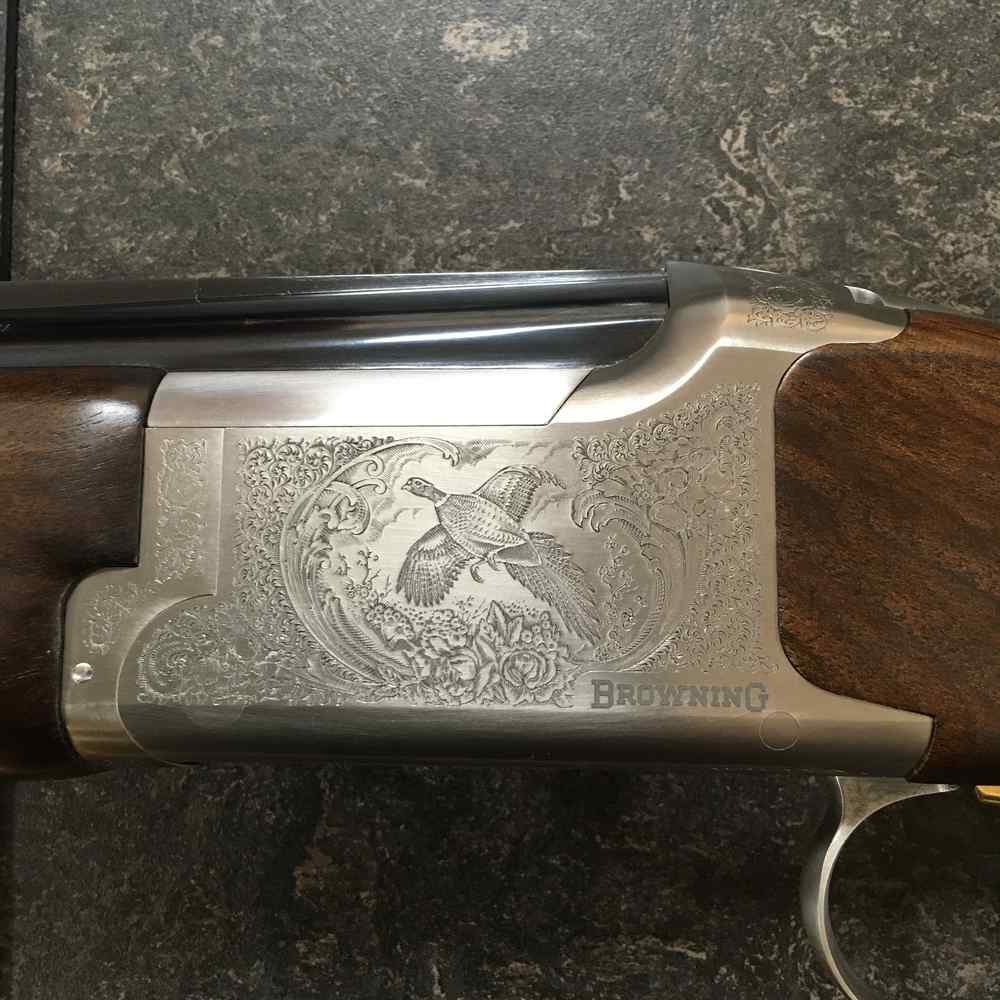 Moving up from this we go to a laser engraved action. The laser allows fine details to be cut with precision and certain features will be begin to have a more hand finished appearance. This is often quite pronounced with the slightly finer detail in game birds. Some examples of this would be the Caesar Guerini Magnus or the Miroku MK60.

Now we are starting to get to your highest quality laser engravings with utilise a 5 axis laser. This allows the engraving to be cut at a multitude of angles, bringing a true depth and detail to whatever the pattern depicted. A good example of this would be the Beretta 687 EELL Classic. 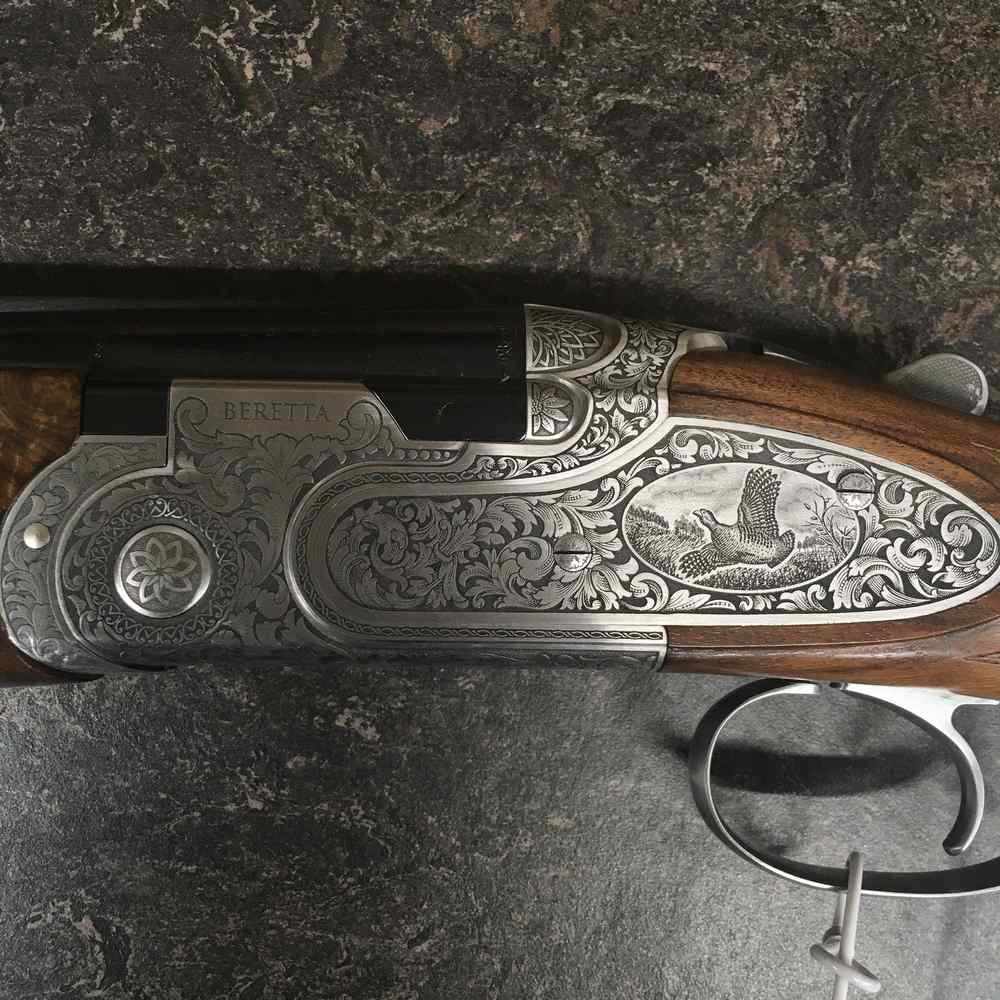 The ultimate level of engraving is carried out entirely by hand by master craftsmen, something that has taken generations to perfect. Everything that you will see on guns of this grade are done totally machine free. The simple borders, detailed floral patterns down to the lifelike cock Pheasant are all the craftsmen’s own doing. You will notice if you ever compare two premium guns of the same design that are hand engraved next to each other they will be slightly different. Although the engraver is given a pattern to work on they each have their interpretation of how it should look. On models with gold inlay the line has to be carefully chiseled out first, and then the precious metal dovetailed in holding it firmly in place. This is a process which can take many meticulous hours to complete. To express the personal touch even further a gun of this grade will always feature the engravers signature. Once the entire pattern is completed the entire action will be blued and then polished. This allows the engraved lines to really stand out; making even the smallest etches in the metal contrast and draw the eye to create a truly magic and unique scene like no other. 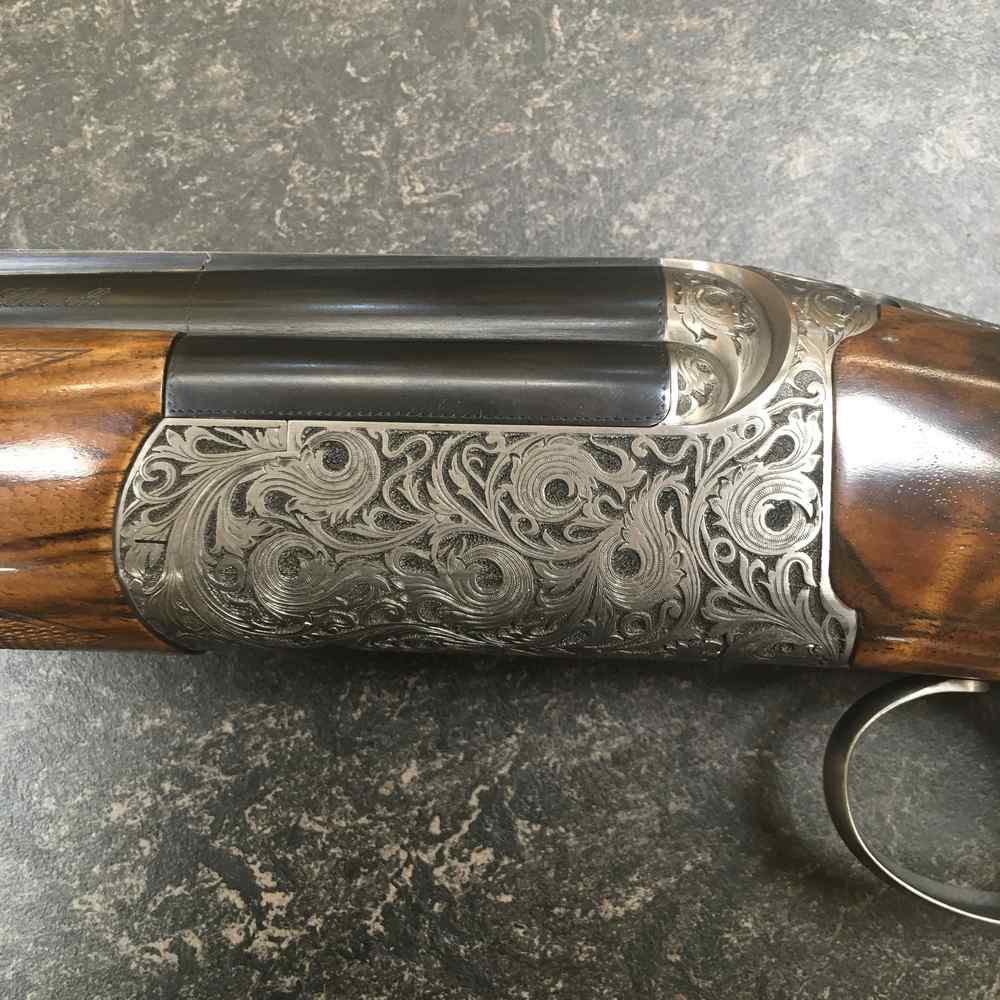 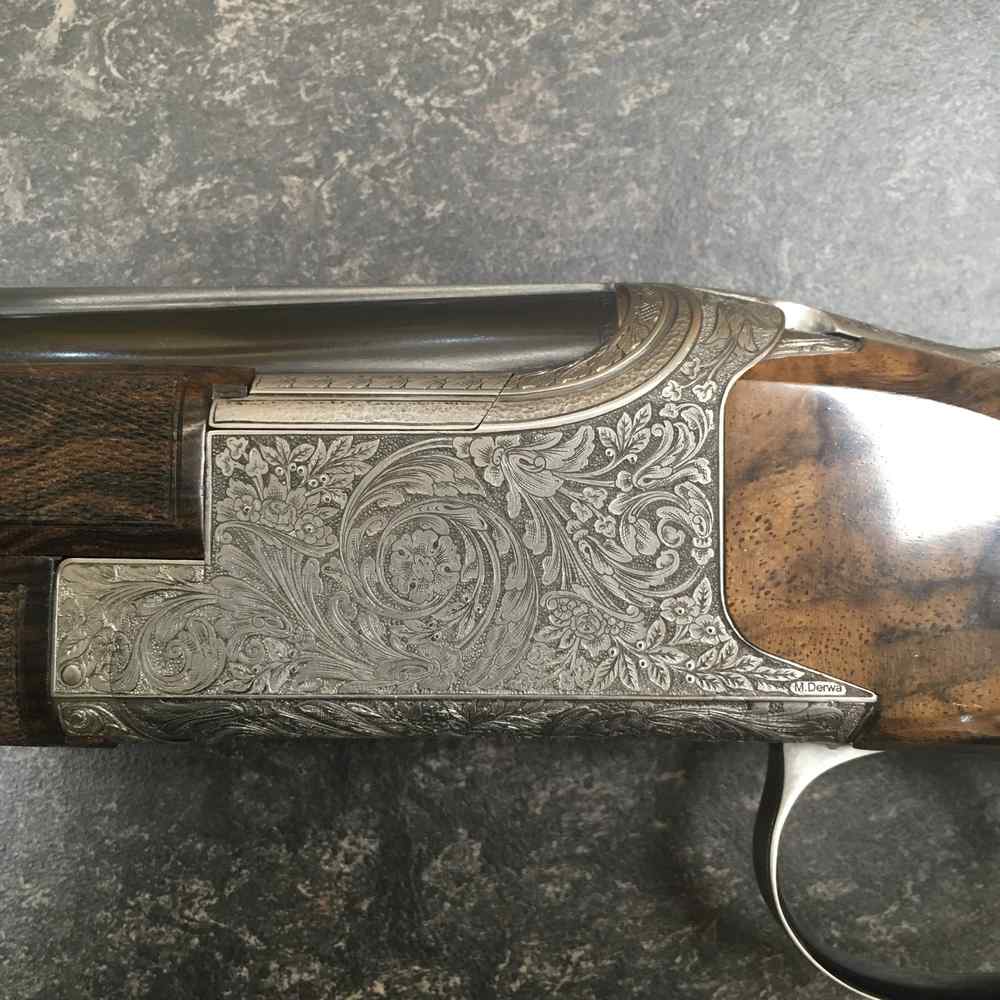 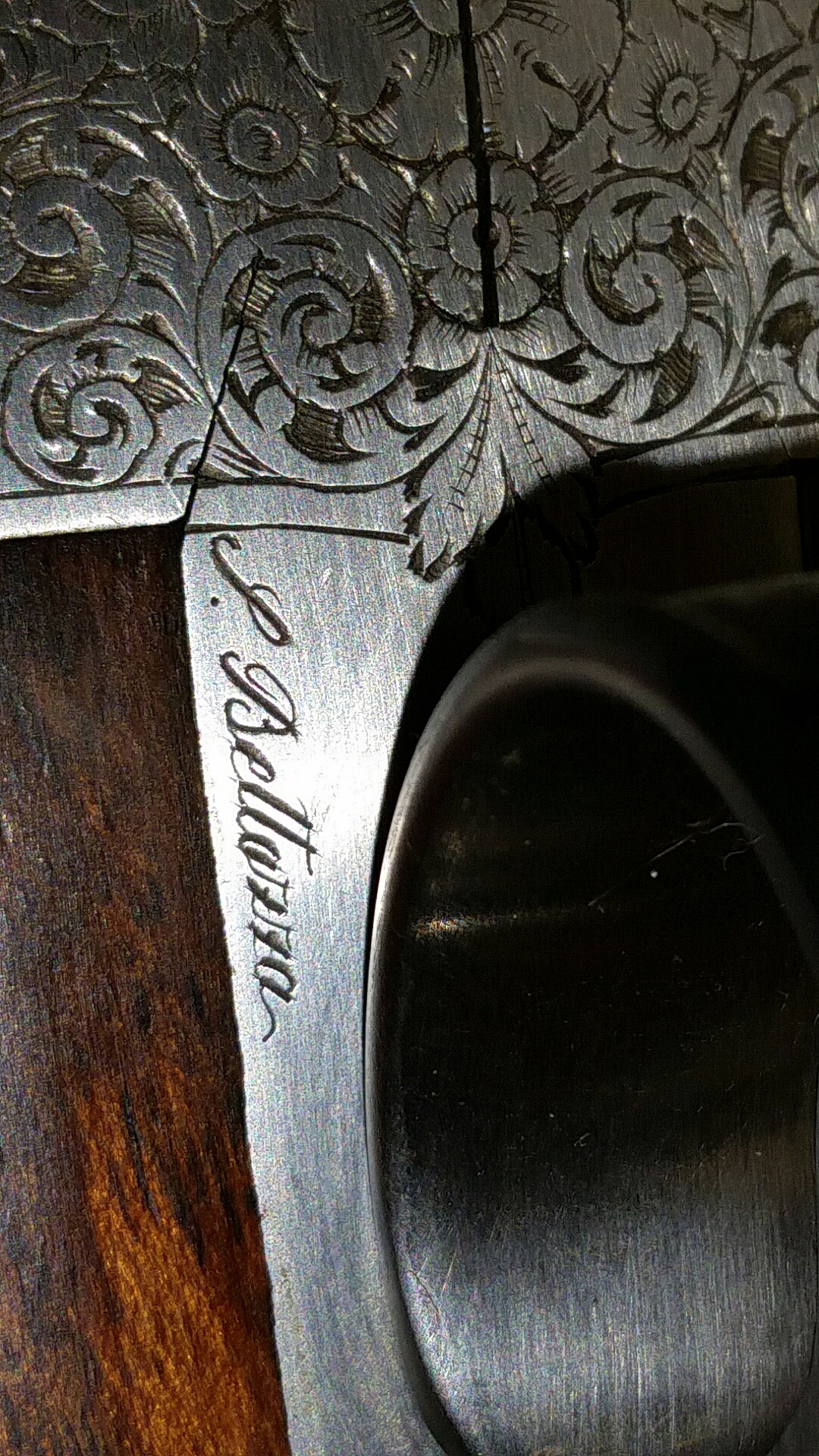