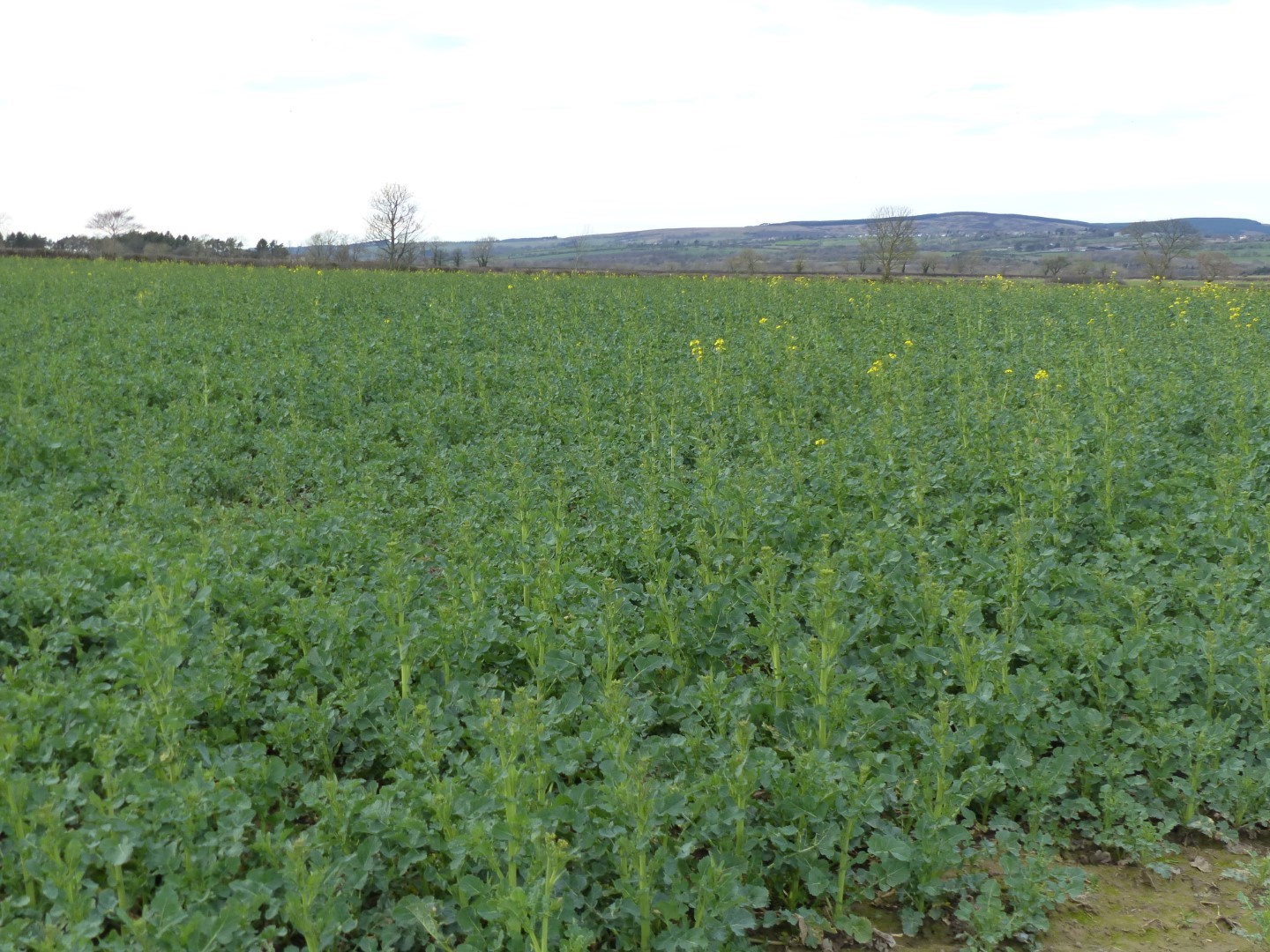 Come February the majority of shooters are already suffering from the game season blues and September/October seems like a life time away. This is the time many of us turn to wood pigeon shooting which is not really feasible during the season due to risk of disturbing game drives.

Through February and early March oil seed rape is definitely the delicacy of choice by the wood pigeon. You will often find rape fields at this time of year completely covered blue as a plague of thousands of pigeons descends upon it. Bird scarers seem to do little to deter the carnage of the crop with the bang temporarily lifting the cloud of birds for them to then settle back down seconds later to continue the decimation of the crop. Control via shooting seems to be the only real effective method to reduce the thousands of pounds of damage caused by this particular pest. Pigeon shooting is undisputedly one of my favorite pastimes and one of the very few silver linings of the past 12 months is that I’ve been able to take advantage of being on furlough to get out as much as possible to do my essential crop protection duty. 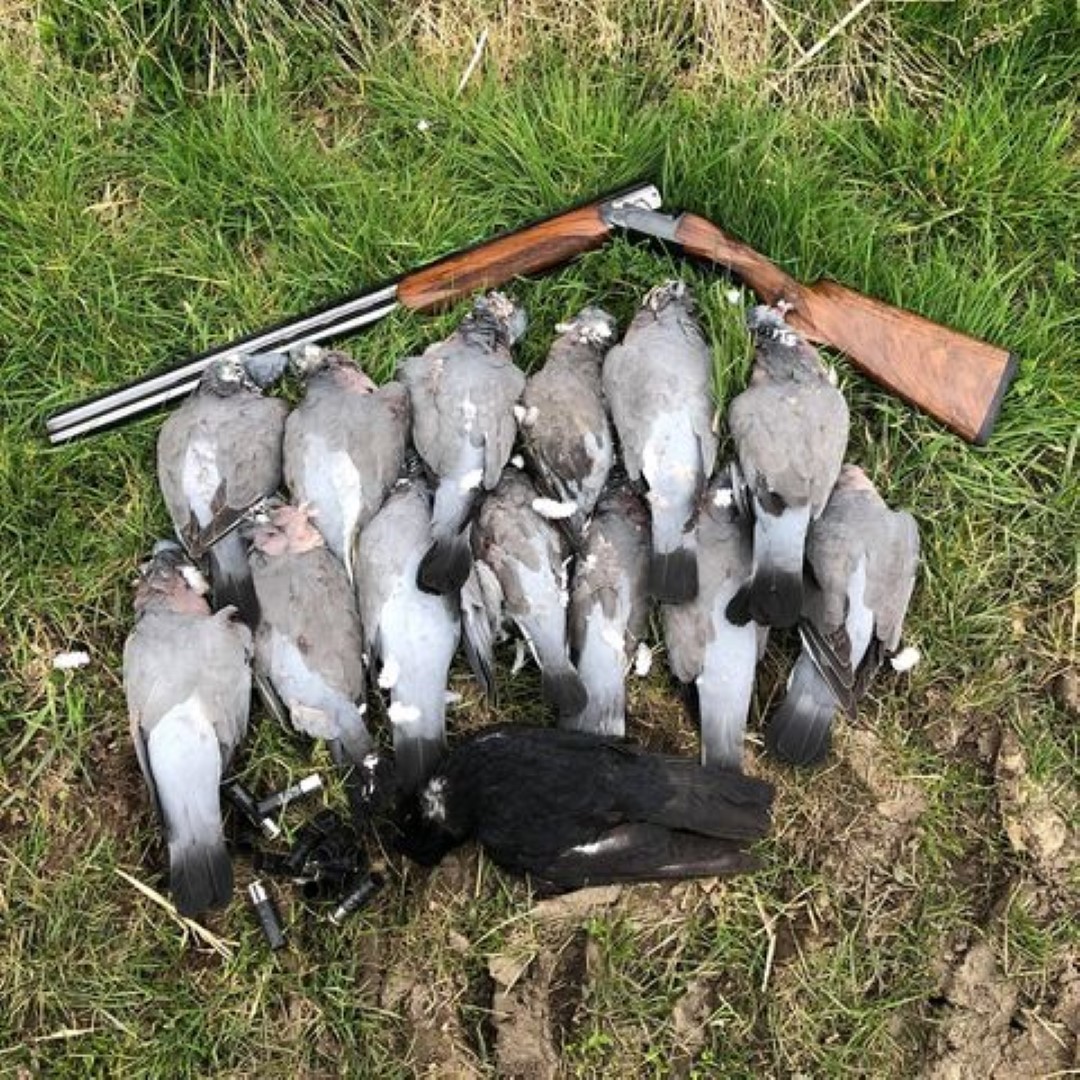 There are a few different methods you can use for successful shooting. Decoying is probably the most effective and most popular, if the birds are playing ball and coming into the decoys you can end up getting big bags into the hundreds. Personally, my method of choice is shooting a flight line/roost shooting. The latter two methods don’t require the large amounts equipment that decoying demands (no decoys, hides, spinning magnets etc.) you simply just require your gun and (plenty) of cartridges, and I like to travel light. The birds also generally present much more challenging and sporting targets, coming in fast driven over the tops of the trees compared to a bird setting its wings hovering nicely above your decoy pattern at 25 yards.

Due to the enormous flocks that pigeons seem to amass during the winter months picking the right weather conditions is paramount to a successful enjoyable day. In my experience a still calm day with little to no wind is just a complete waste of time. You find yourself firing one or two shots and then watching the large dense cloud of pigeons disappears over the horizon never to been again all day. My best bags have been days with a stiff breeze of around 15-20 mph winds. Wind brings the birds lower (into range of my capabilities), it also helps break of the large flocks and helps disguise the noise of the gun. It is very important to mention pigeons will always fly into the wind to land so I always stand with my back to the wind to face the oncoming birds. A good afternoon flighting can easily rival a paid day’s game shooting providing exceptional sport all while being completely free. 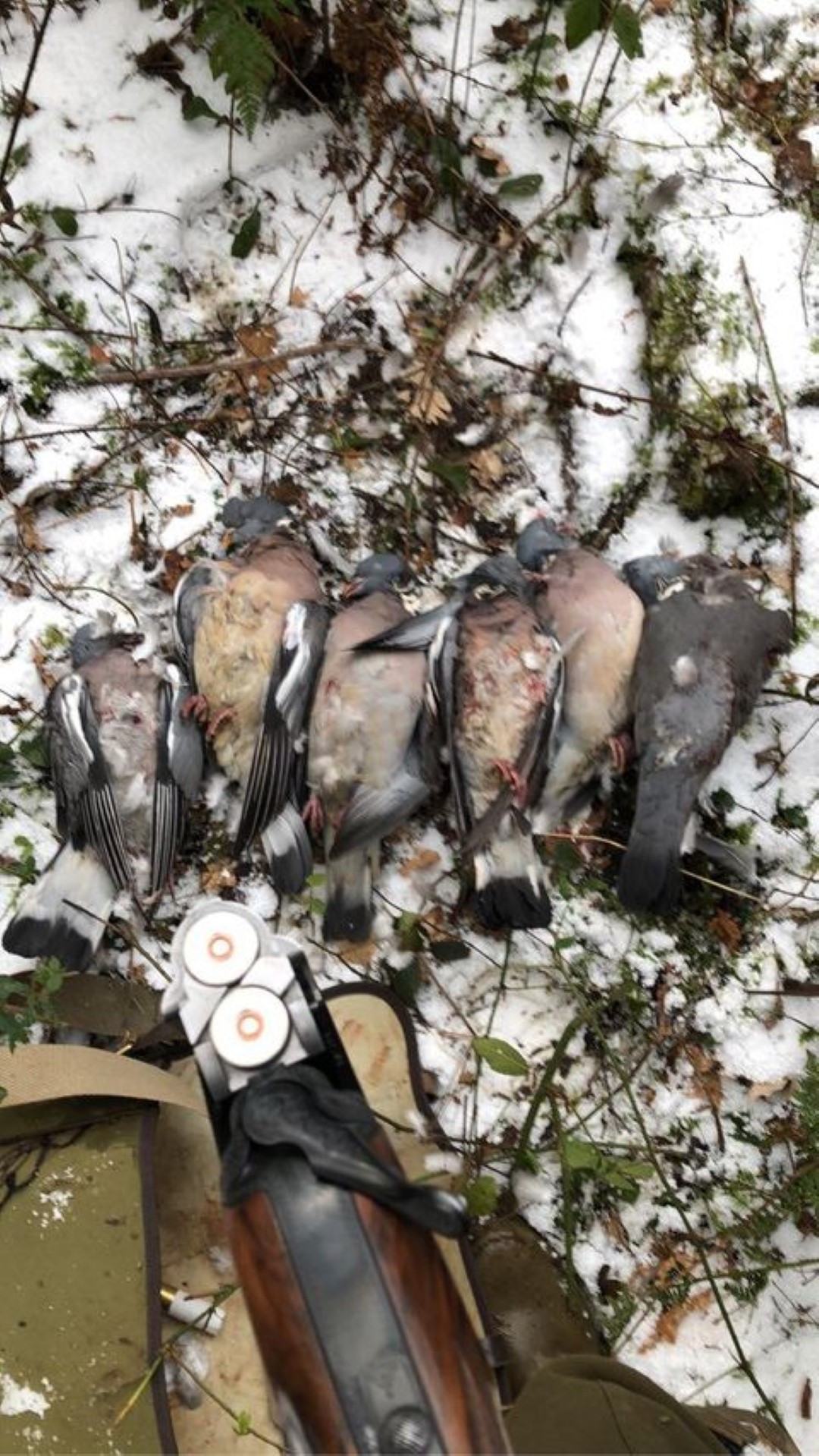 Reconnaissance is vital to a successful day shooting and spending a few hours identifying which wood and fields the pigeons are flying back and forth from will help you pin point the best spot to stand. Make sure to bring plenty of cartridges, the times I’ve just filled my pockets thinking I won’t see much action I’ve come to seriously regret it, massively underestimating how many birds I would see and running out within a matter of minutes.

Whether you finish your day with a final bag of 5 or 55 and you’re like me you don’t let any wood pigeons go to waste. When prepared correctly wood pigeon breast is in undoubtably one of the best tasting, most flavorful, completely free-range wild meats we have the pleasure of having access to in the UK.

When it comes to the choice of gun used it is a personal preference. A lot of shooters will have a rough gun that they’re not afraid to knock and get covered in mud saving they’re best shotgun only for formal driven game days. That might be something like a cheap over and under or side by side but more often than not a semi auto is selected for the job. When pigeons are coming in fast semi autos are very fast to load, with the added benefit that you’re not getting the barrels caught on the front of your hide like what often happens on actions you have to open the barrels to load. The majority of semi auto models available for sale now come a with synthetic stocks option so you don’t have to worry scratching a nice bit of walnut on barbed wire or branches and many even come with special rust preventing coatings on the metal work like cerakoting, Benelli’s BE. S.T treatment and Beretta’s Aqua technology. It is really hard to beat the sheer practicality of the semi auto shot gun. However, I use my Perazzi MX12, this is for a few reasons; for one I don’t like littering the country side with empty cartridges, often semi autos eject them several meters and they can be hard to find in the leaves or long grass, with an over and under I can catch the cartridges as they eject and make a neat pile to collect at the end of the day. Mainly though I find the consistency of using the same gun for everything whether it be game, clay or vermin shooting really boosts my shooting ability. A gun I know that fits me correctly, I know the balance, how it handles and I know the sight picture I need to see. Another important point worth mentioning of the benefit I see using an over and under is if anyone happens to walk past while I’m out I can simply open the gun and from a few hundred yards away it is clear the gun is safe, alas, that’s not the case with a semi auto. 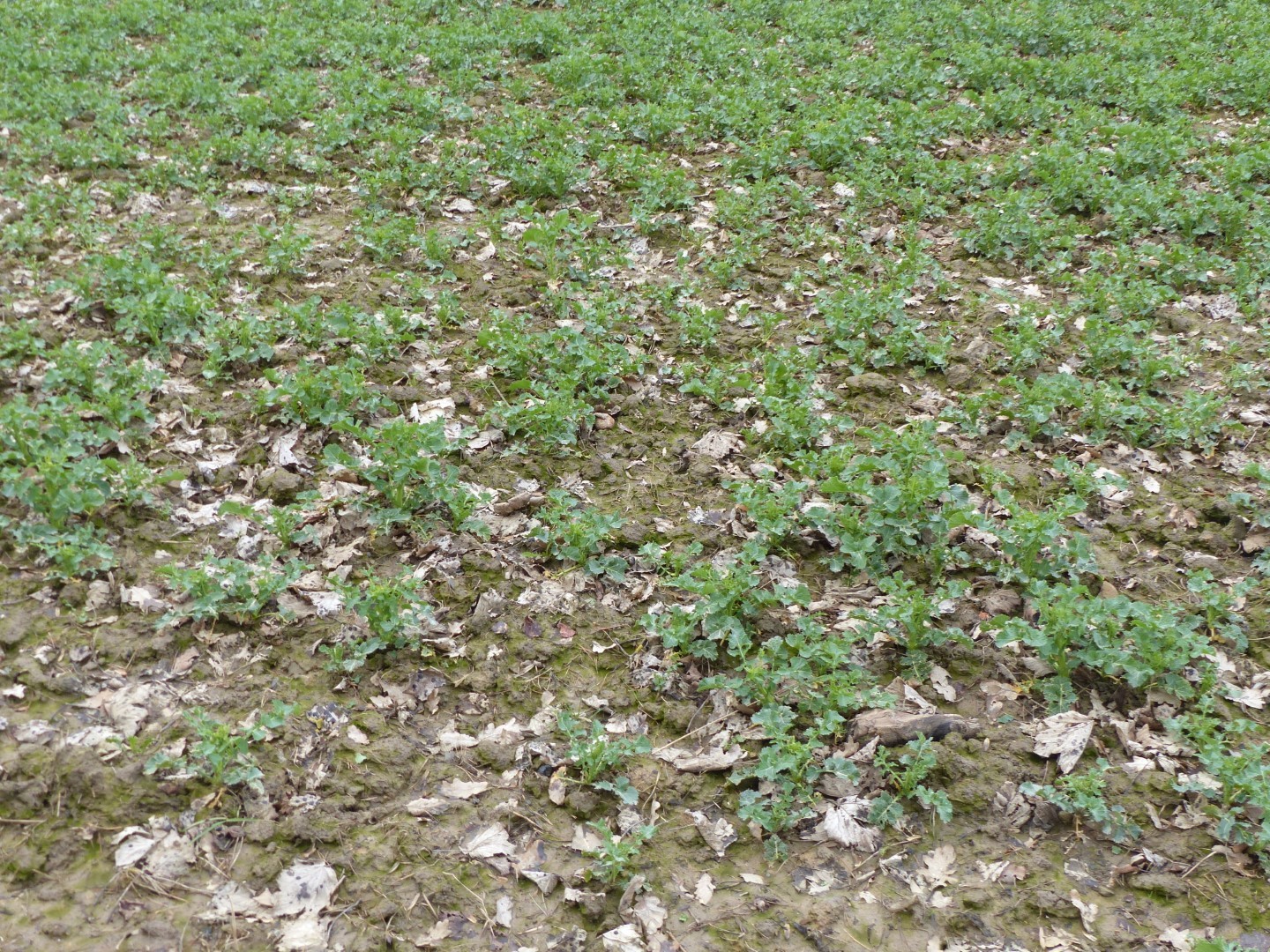 Damaged crop by the pigeons feeding

Cartridge choice is equally as personal as gun choice. For the average distance pigeons are shot at you really don’t require anything that special, something around a 30 gram 6 shot like a Hull Superfast Pigeon, Eley Pigeon Select or Gamebore Clear Pigeon is more than adequate. I honestly believe that the vast majority of pigeon cartridges produced by well-known manufactures tend to all perform excellently but that doesn’t stop us from all having strong opinions on our favorite round of choice. This is usually due to shooting exceptionally better than average on a given day which consequently ingrains the idea into one’s mind that the cartridge being used is the Holy Grail of all cartridges. Of course, it has nothing to do with the fact you just happened to be more focused that day as a result of getting a good night sleep and having a decent breakfast. I myself am no exception, with my cartridge of choice being Hull’s High Pheasant Extreme in a 30 gram 6. I find them a very smooth compared to alternatives I’ve tried while still providing exceptional killing ability at range. It may be considerably more expensive than the pigeon cartridges available on the market (which are all more than capable of doing the job) but goes back to the same reason I use the same gun for everything thing. I find constancy in equipment used not only boosts my confidence but it takes out any element of questioning my gear, I know if I shoot poorly that’s solely down to me, which is more often than I care to admit.

Wood pigeons are undoubtably one of the most challenging and sporting bird we have in the UK and best of all it free due to the severe damage they cause to crops. For honing one’s shooting skills there is nothing better. If you fancy trying your hand at pigeon shooting it is generally pretty accessible to those who seek it. The best way obtain permission is to first ascertain fields which are actively being heavily targeted by pigeons. Find out who farms the land as legally vermin control is the right of the persons who owns the crops and that is not necessarily the land owner or the person who holds the shooting rights. Approach the farmer dressed respectfully, turning up dressed in your scruffy camo pigeon shooting gear is a sure way to make an immediate bad impression, politely point out the fields that are being damaged and offer your services to help control the pigeons, most farmers would grateful to have someone help limit the financial loss.