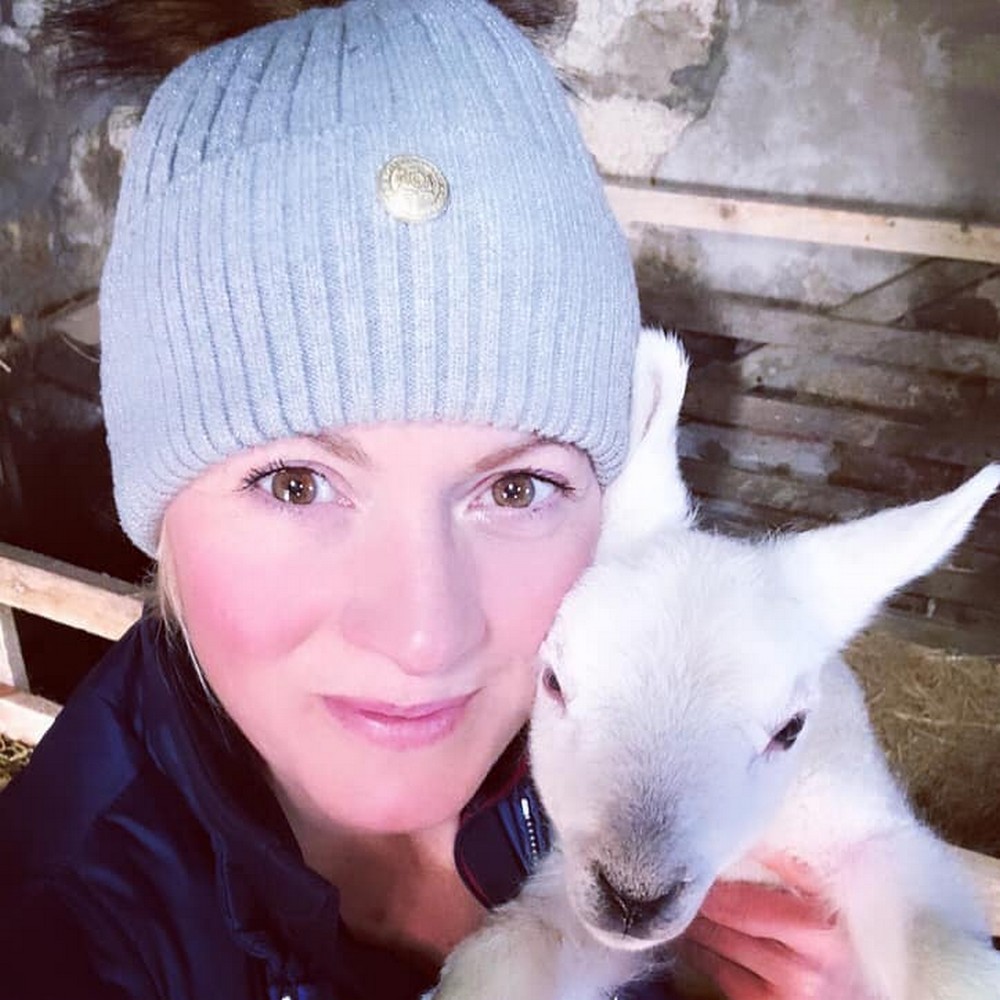 We Join Jo on her lambing journey of 2020 with the Bywell flock!

Spring is my favourite time of year, flowers blooming, new life awakening and lighter nights looming, what’s not to love? Since joining Grant and his mixed flock of Mules, Cheviots, Texels and Cheviot Crosses it has only enhanced my love of Springtime. There’s nothing quite like a nursery full of newly born lambs knowing you’ve done your best to bring them safely into the World. I joined Grant as a total ‘rookie’ with an abundance of enthusiasm which he had to tame. I’ve learnt a lot from him and his words resonate in my mind guiding me through the lambing season. He says “As long as they have a belly full of milk and a bit of shelter they can get through the night”. The flock are mainly lambed outside, with each Ewe scanned to see how many lambs she is expecting and marked accordingly. Depending on this number being either singles, twins or triplets the sheep are then moved to separate fields making things easier during the lambing. The markings are invaluable in knowing how many lambs to expect and how much to feed them. However, this isn’t always the case!Our first ever surprise of quads were born this year after expecting her to just have Triplets. We ended up with four healthy lambs. 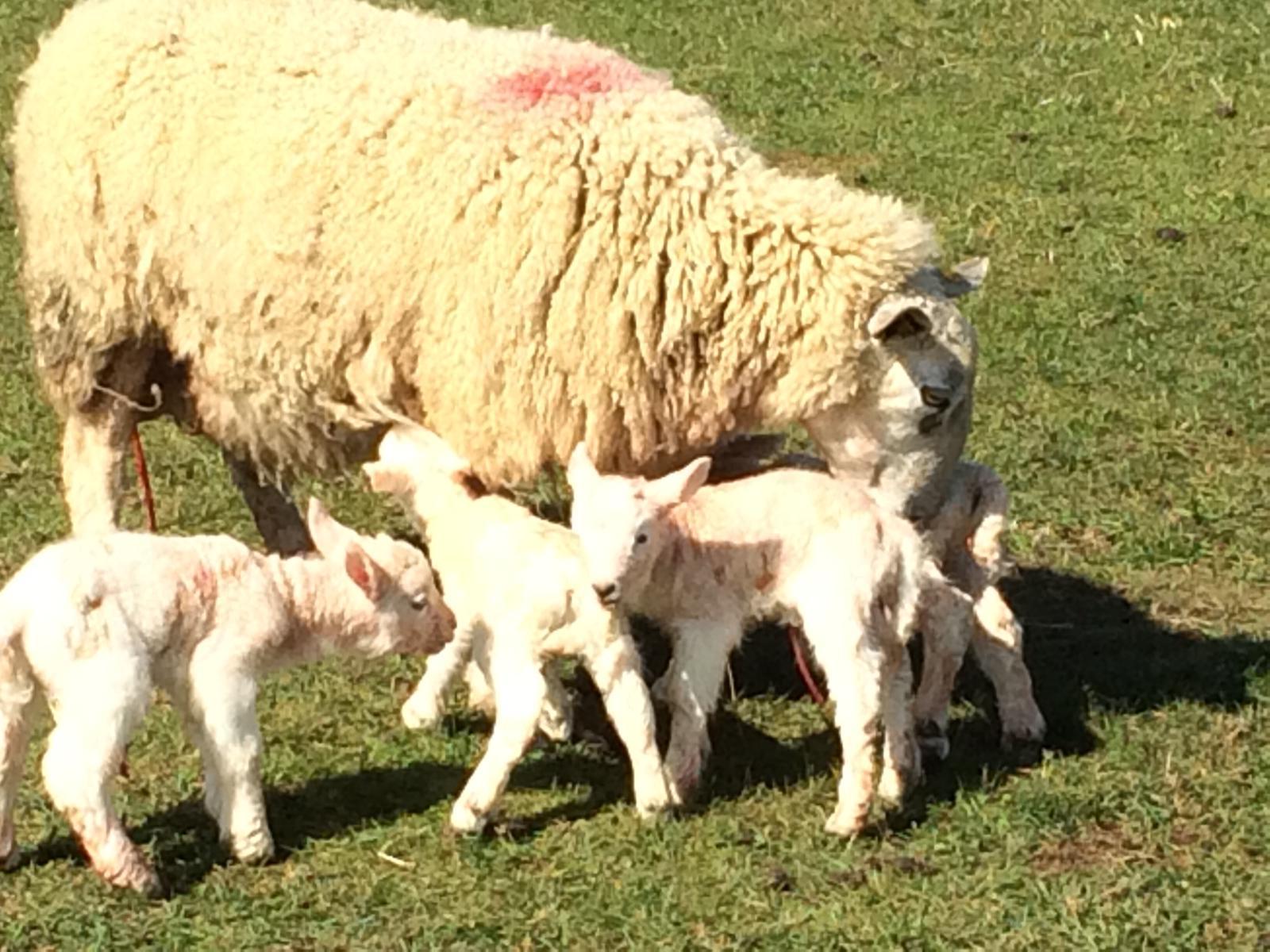 My day starts at first light and I can honestly say it excites me!I Pull on my overalls, grab my shepherdess crook and head to the field to see what surprises await. There really isn’t anything quite like an early morning walk across the fields, as the sunrises and the birds are singing, there is something quite tranquil about it all.It’s been a slow start this year and I often hear Grant saying ‘we need a shower of rain to set them off’. We’ve still yet to have it! First light often sees the start of the days lambing and there’s nothing more exciting than seeing a Ewe ‘star gazing’ or starting to nest, you know a lamb is on its way! 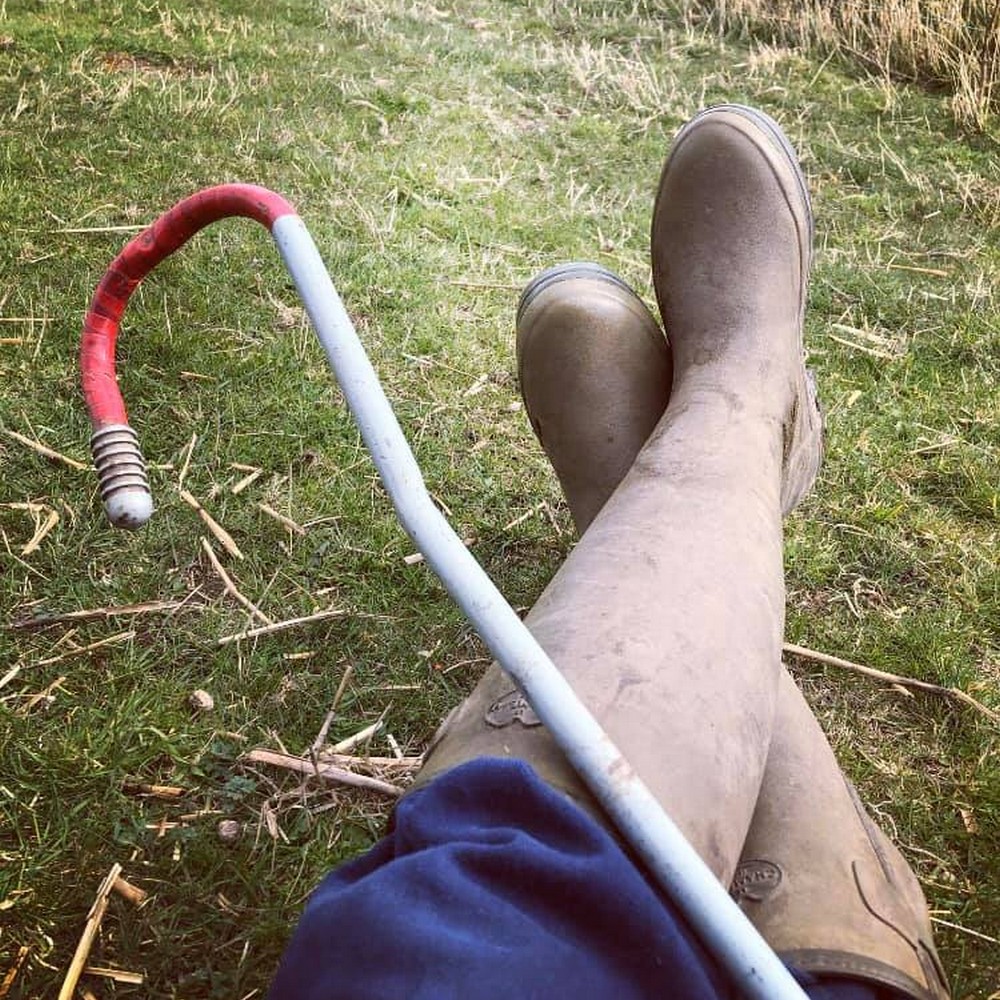 The twin field has seen more activity lately with the majority lambing themselves. I’ve found that unless you see a problem its best to leave them to it, as nature intended. If I had a choice of a Mule or Texel to lamb, I’d choose the mule. They are natural mothers, adore their lambs and generally lamb easily.I’ve often said ‘oh crumbs’ about a Texel. They can be so lazy lambing and have large lambs too....for goodness sake, push Hinnie! My favourite set of twins born this year so far is Tiny and her big brother. On a final field check before nightfall the Ewe was looking as if lambing was likely, so she was caught and brought in for the night. After some time in the lambing shed with little progression, investigation was needed. As I put my hand in feeling for legs and a head, I found legs but no head! In technical terms Posterior presentation, basically bottom first! The legs were clearly hind legs, not just because the head was missing but how the joints flex. In front legs the knee and fetlock joints flex in the same direction, whereas the in the hind legs, the hock and fetlock joints flex in the opposite direction. With a bit of pulling as the ewe is straining ‘Tiny’ arrived. Tiny was her name as I’m sure you can guess from her size! You get to realise on first glance which lambs are ‘good lambs’. Clearing the fluid from her nose and mouth and rubbing her chest I willed her to breath, there was something but she was clearly weak. I poked a blade of straw up her nose and she had a little shake. Although this sounds mean it doesn’t hurt them and encourages them to cough and clear their airways. A shake of the head is always a positive sign when a lamb is first born, removing any fluid and you can breathe a sigh of relief. I waited a moment whilst the Ewe licked her clean, warming her up and forming a bond, then felt for her sibling. The second lamb had a leg back, again, as the Ewe strained and a bit of pulling he eventually came out. His initial appearance shown he was much stronger, larger lamb and was on his feet before Tiny lifted her head. That night I put Tiny under a heat lamp in the corner of the pen. She was weak and couldn’t stand to suckle and sitting the Ewe down proved fruitless in an attempt to get her to suckle. Reluctant to ‘tube feed her’ I persevered, milking the ewe and gently bottle feeding the lamb. I then encouraged her to suckle by scratching her bottom where her mother would naturally nuzzle her to suckle, knowing if she had some milk she’d have a better chance. The ‘first milk’ from a Ewe is called colostrum and is high in fat giving new born lambs plenty energy to try and survive the first few crucial hours. It’s amazing how much a lamb can improve after some milk. Immunoglobins in the milk protect the lamb against disease and its very warmth helps prevent against hypothermia. My patience was rewarded and she slowly suckled. I left her snuggled in the straw and wondered what the morning would bring. 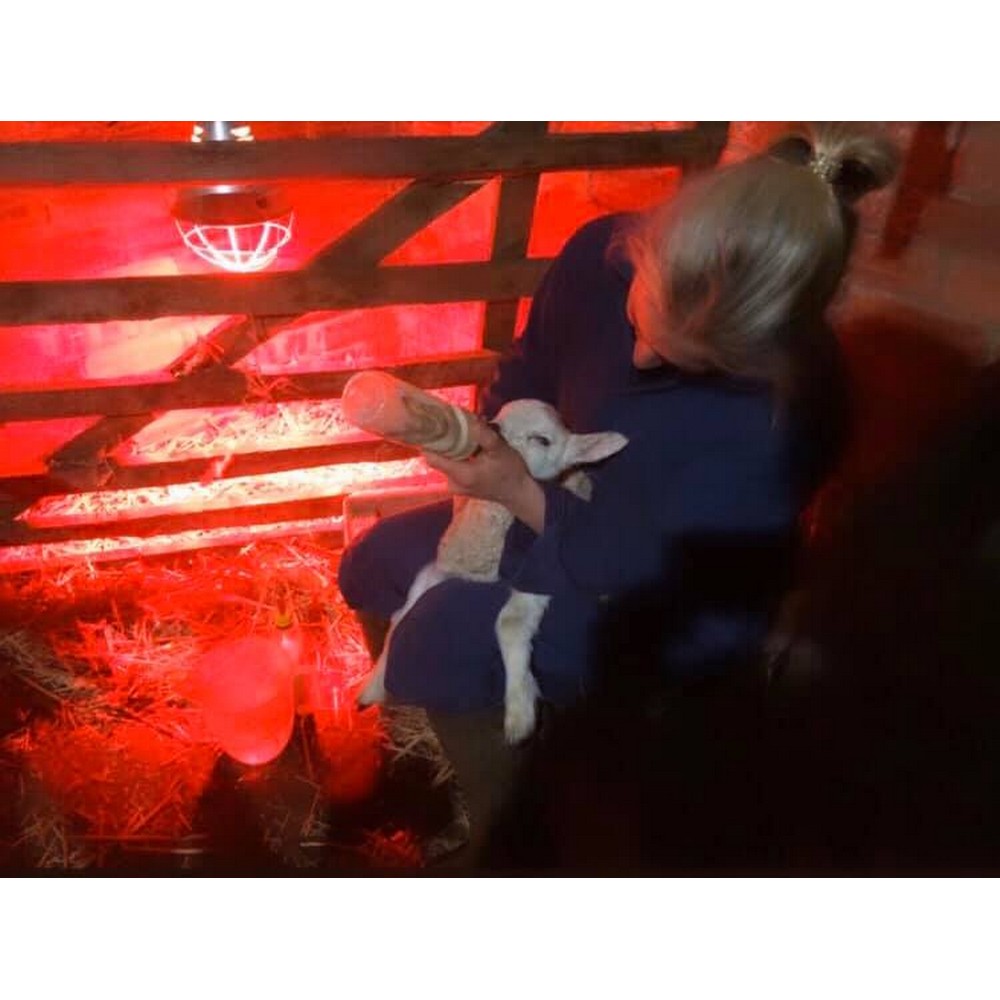 The following morning, I apprehensively peeked into the lambing shed and to my surprise there she was. Not the strongest lamb but up and suckling, a little fighter. Those are the moments that make me fall in love with lambing time. I then skipped to the field merrily that morning! 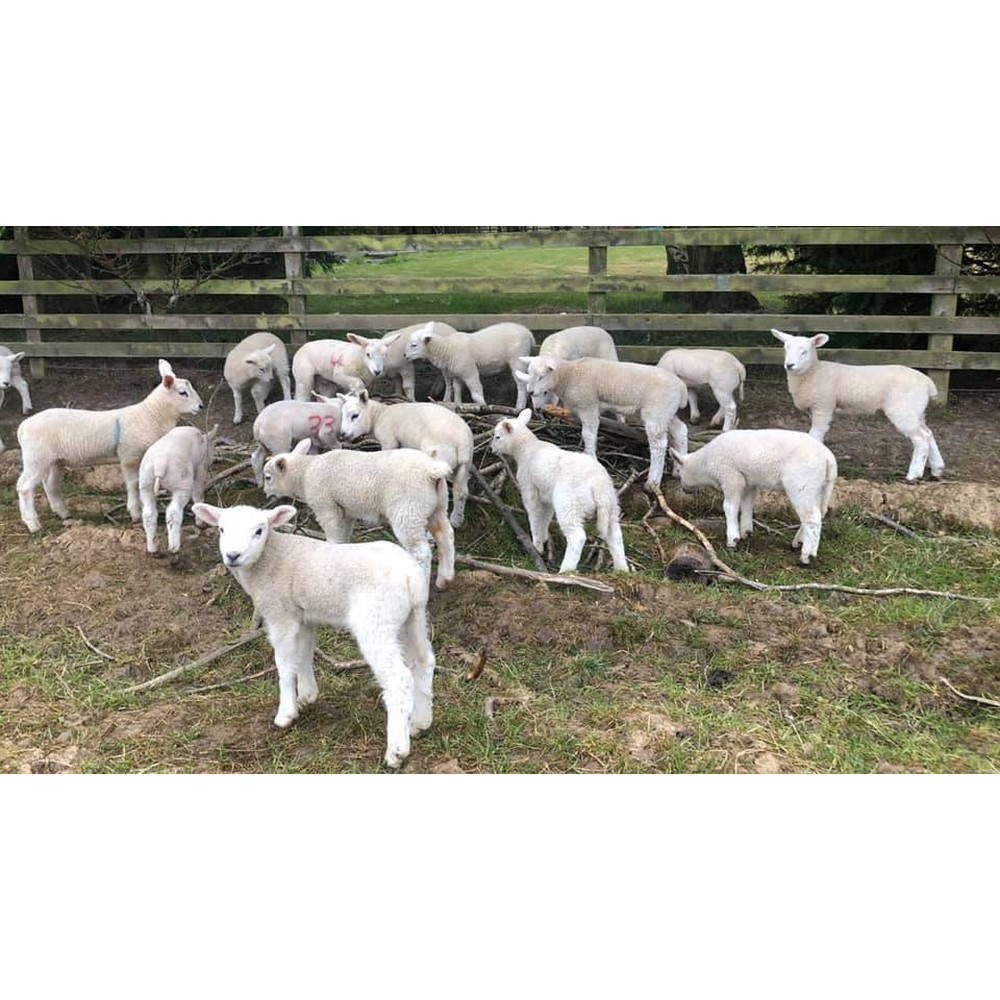 As experience builds you begin to spot lambs that need extra attention. They can often appear hunched over, weak and hungry looking with a different ‘bleat’ too. A quick feel of the lamb’s tummy tells you if they have suckled and are getting milk. You also need to check the Ewes’ bag for signs of mastitis, sub-clinical being the harder to detect. Spotting these things early makes for a successful lambing and are key shepherding skills, as is the challenge of catching ewes. ‘Why didn’t I play rugby?’ springs to mind as Grant who is clearly a ‘star player’ and in his prime, makes it look so easy. I’m often dragged along the field on a Ewes back hanging on for dear life, knowing if I let go I would never catch her again. Sassi who is the resident sheepdog is always on hand to assist. She has a brilliant natural ability and often one step ahead of us. She listens intently to Grant and loves to work. It has often been said ‘a good dog does the work of ten men’. I could certainly do with two and that’s just for the chores at home! A sense of humour is an absolute must with sheep and believe it or not they aren’t as silly as they look. They certainly know feeding time as often one swipes my feet from under me, running through my legs with Grant sitting on the quad with a little cheeky smirk. It did make me giggle though, as I lay flat on my back surrounded by sheep. I can honestly say it has been a continuous cycle of learning and laughter. You talk to other shepherds and in the process I’m not sure you ever stop learning. Each season brings its own highs and lows. 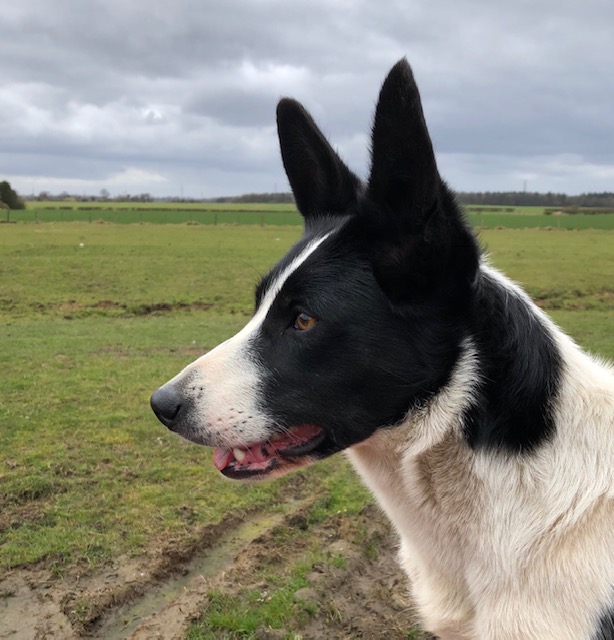 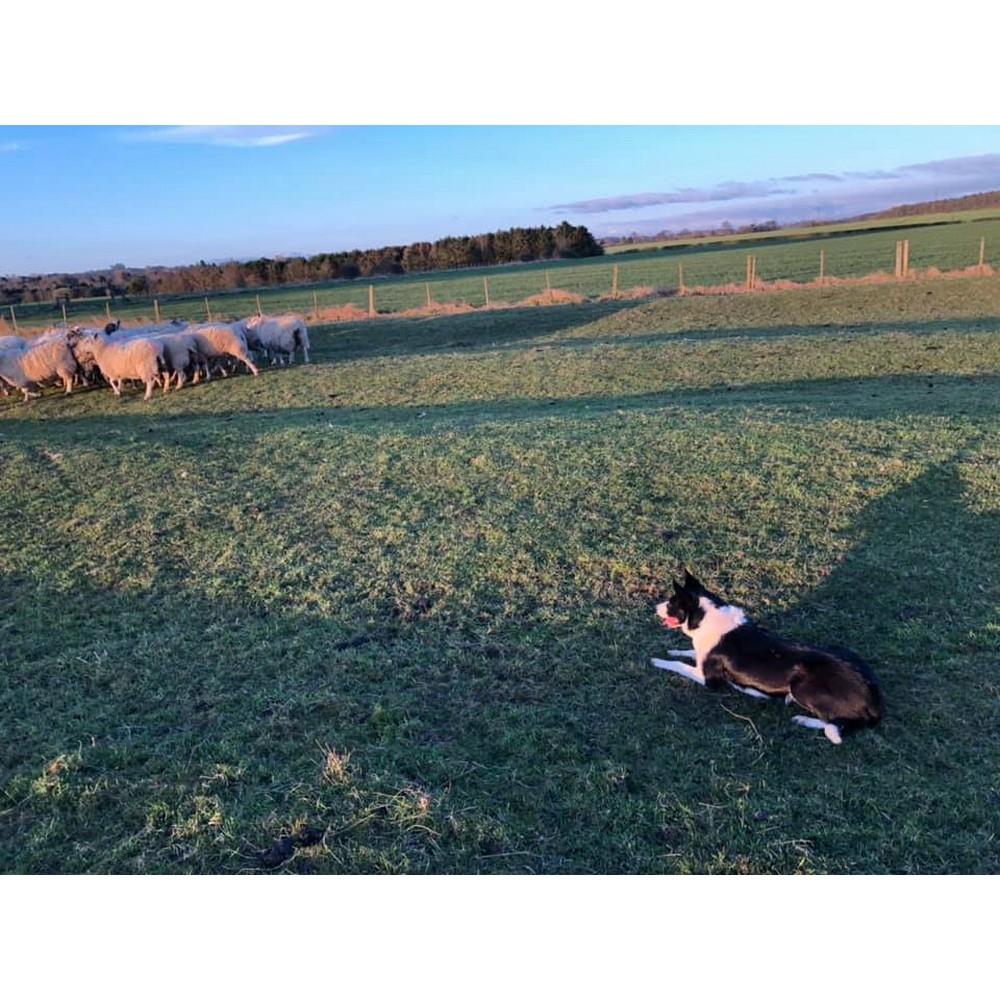 The art of ‘setting a lamb on’ can be poetry in motion if everything falls into place. Setting a lamb on is when you want another Ewe to accept a lamb as if it’s her own by allowing it to feed and take her milk. You need several things to come together to make it work though. Firstly you require the Ewe at the right time being at the right stage of labour or it can be a waiting game tentatively looking for signs of one lambing. The Ewe being away from the main flock such as the ‘star gazer’ or the one scratching the ground making themselves comfortable to lamb and hurray the sight of a water-bag! Magic, we can now set a lamb on. It is a never-ending cycle of iodine on navels, squirting spectam in their mouth (preventing ‘watery mouth’) marking up and trailering to the nursery. I’ve lost count of the times we’ve said ‘what number are we on?’ as days merge into one. 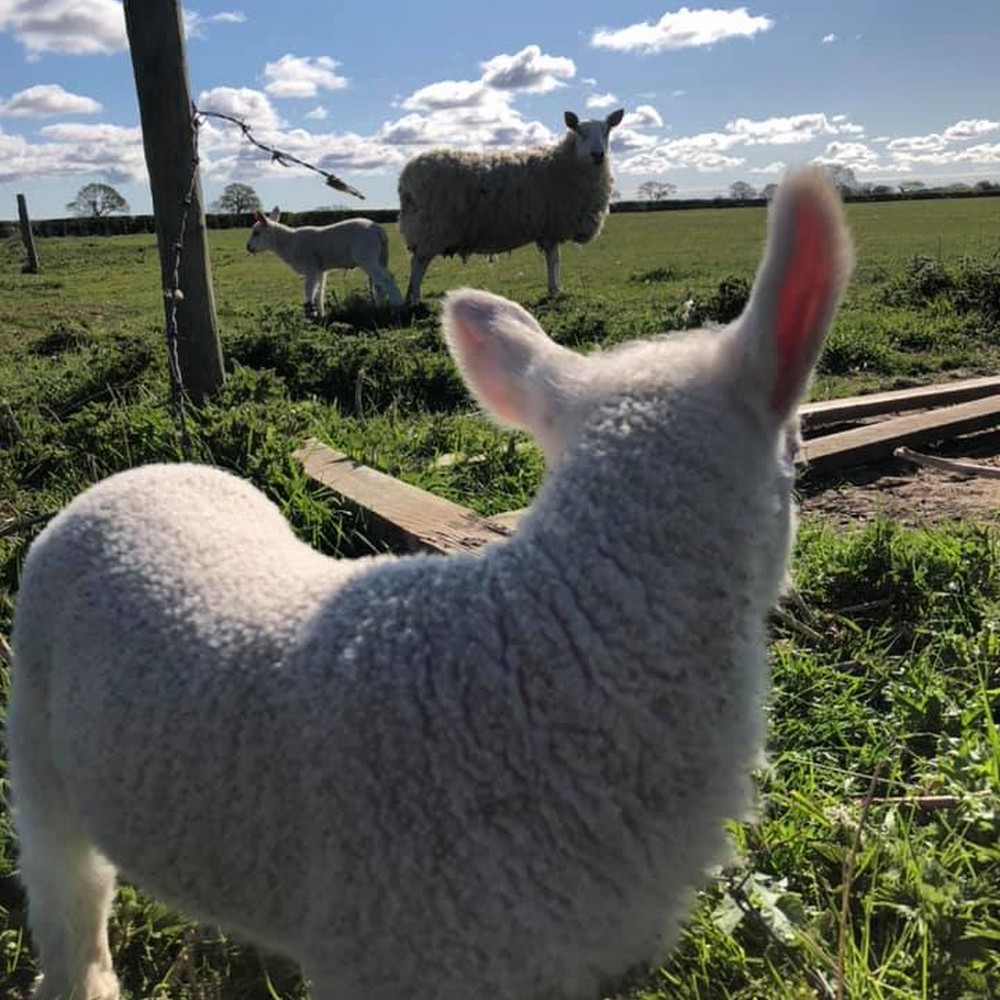 As you near the end of the lambing season and there are only a few left to go I often feel the same sense you have at the end of a great party which you are reluctant to leave ....or the book you are enjoying immensely and you’d rather not turn the last page. I am sure there are some shepherds that would be happy to leave the ‘lambing party’ having aged considerably and are in desperate need of sleep, but I have to say I just love it. The sight of the nursery field where the lambs are frolicking and racing around bales gives me a sense of achievement. A successful year, and I would even go as far as saying ‘dream team’…….

Thank you to Grant for your wisdom, so bring on lambing 2021! 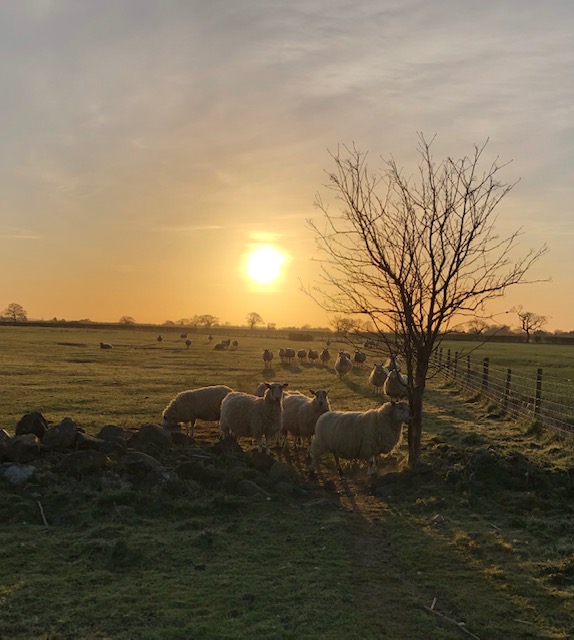