Last week John was abroad again, this time in Germany visiting the Krieghoff factory for a made to measure K80 Parcours. We catch up with him about his visit to the factory and the amazing Mϋller indoor shooting centre.

Despite a long history suppling a range of off the shelf Krieghoff’s, until recently we have never visited the factory for a custom-made gun. So, when Richard, who currently shoots a K80 Parcours decided that he would like to upgrade to a Renaissance engraved model with a custom-made stock, I was delighted to head off on our first trip to Germany. Richard visited us, and we carried out the usual pre-fitting service that we offer before any made to measure trip.

I liaised with Alan Rhone, the UK importer of Krieghoff, who kindly booked our hotel, airport transfers and gave us some great advice on how the trip works and what to expect from the process. He also suggested a visit to the Mϋller indoor clay pigeon shooting range, to try out the custom stock. As preparation, I had a chat with Krieghoff sponsored shooter Paul Chaplow, who I knew has made the trip many times before. This helped give me and Richard an idea of how the stock measurements are detected and the process that follows. With a good idea of what to expect we travelled to Germany, where our expectations were hugely exceeded!

On arrival at Stuttgart airport we were met by a Taxi shuttle service, who took us the 80km journey through the beautiful German countryside and directly to Krieghoff HQ. We arrived just before lunch and stepped out of the Taxi feeling the oppressive heat that is gripping Europe at the moment and were greeted warmly by Maximillian Imbach who works at the factory and speaks perfect English. He offered us some greatly appreciated ice-cold drinks and took us to meet Ralf Sommer the head stocker. 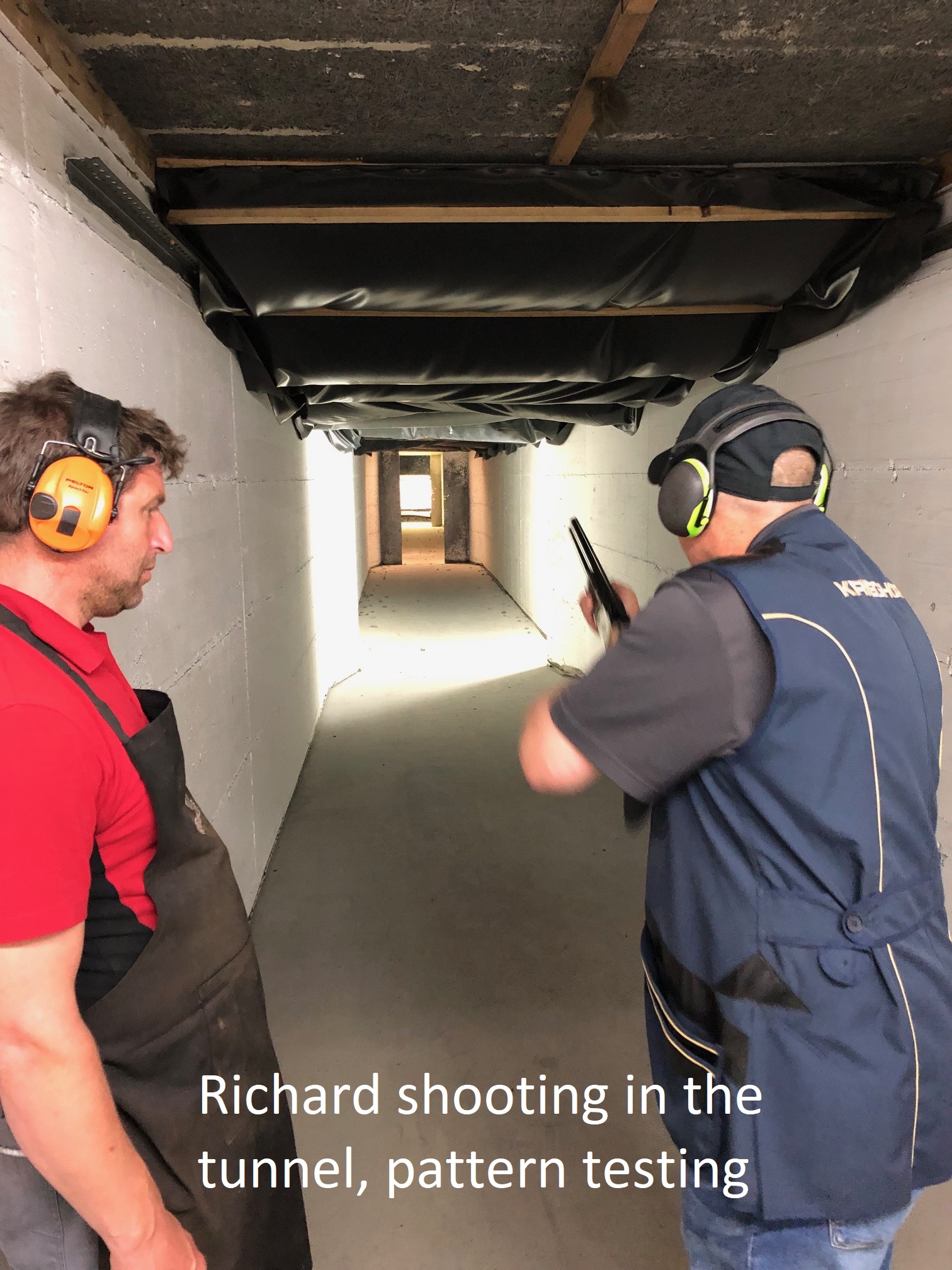 Ralf is a real personal guy and immediately put Richard and I at ease. We got straight down to business discussing Richard’s needs from a custom-made stock. Ralf looked over my notes from the pre-fitting at Bywell and selected a try stock and fitted it to a K80 Parcours try gun. Richard dry mounted the gun and after Ralf adjusted the stock to suit, we went down into the basement where Krieghoff have a tunnel to pattern test. Richard shot a number of times at the pattern boards and we examined the results and adjusted the stock until Richard, Ralf and myself were happy with the results. 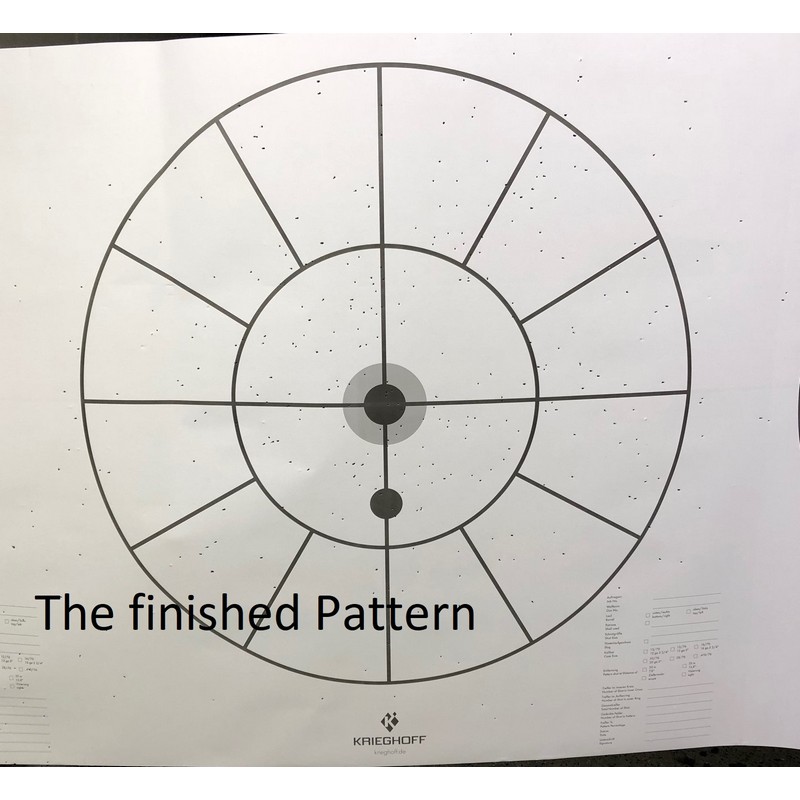 The only thing that was left, was to choose the stock blank. Alan Rhone had previously emailed us pictures of some stock blanks before the trip and from these Richard had picked out one to reserve. As everyone knows the wood on your gun is such a personal choice, not only the colour but the grain and shape of the figuring has to be taken into account. We managed to narrow the choice down to 3 from about 15 Custom grade 3 blanks, all of which were really beautifully figured. In the end Richard didn’t choose the blank he pre-selected from the photographs, because he felt it may be too light in colour for him after seeing it up close. One thing I noticed was the size of the blanks where much bigger than others I have seen, Ralf told me that this enables him to cut the stock to use the best part of the wood. 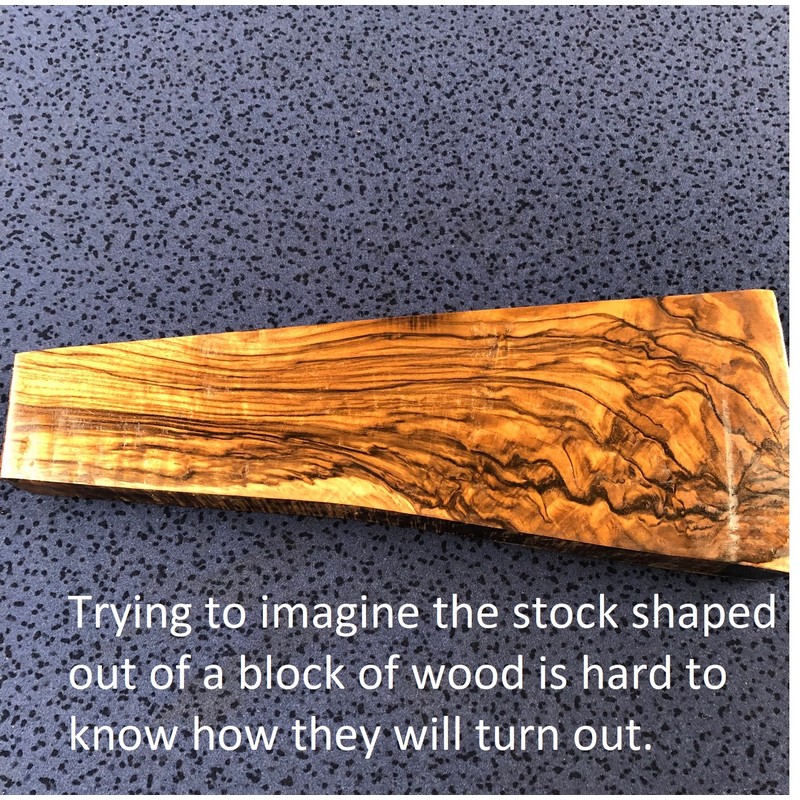 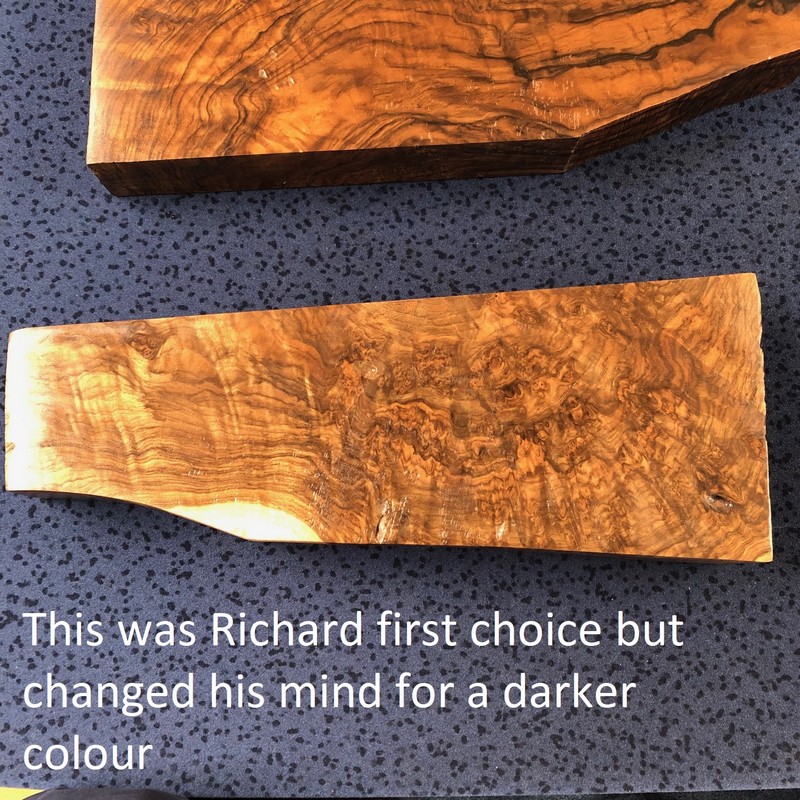 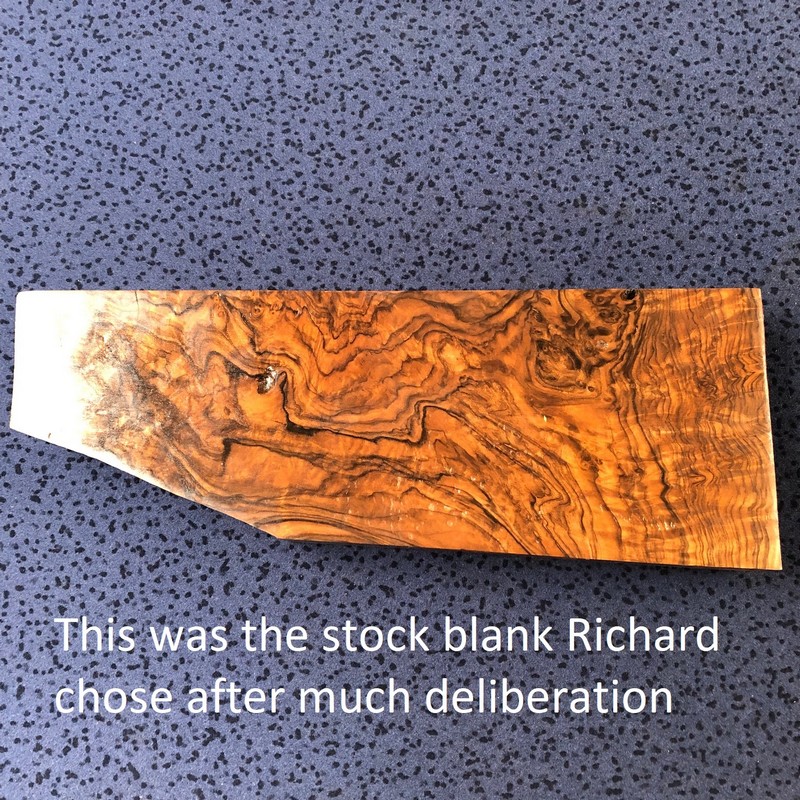 After the wood choice Maximillian gave us a guided tour of the factory, showing us different stages of production, how some of the gun parts are made and the strict tolerances and quality control procedures they follow. The factory has a great feeling of old fashion skill and pride combined with some high investment in state-of-the-art CNC machinery. For instance, one worker was soldering ribs on barrels by hand in the intense heat and in another room a fully automated robot polishing the outer of the barrels ready for the blueing process. It was obvious right through to the assembly stage, that the men and women working there weren’t just making gun parts, they were manufacturing individual guns that they have pride in. 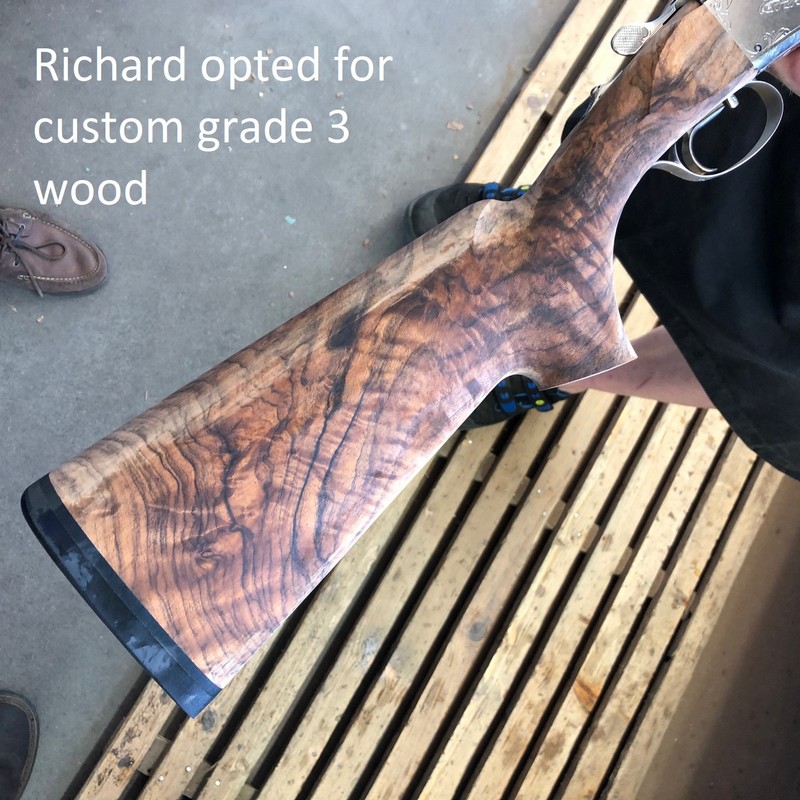 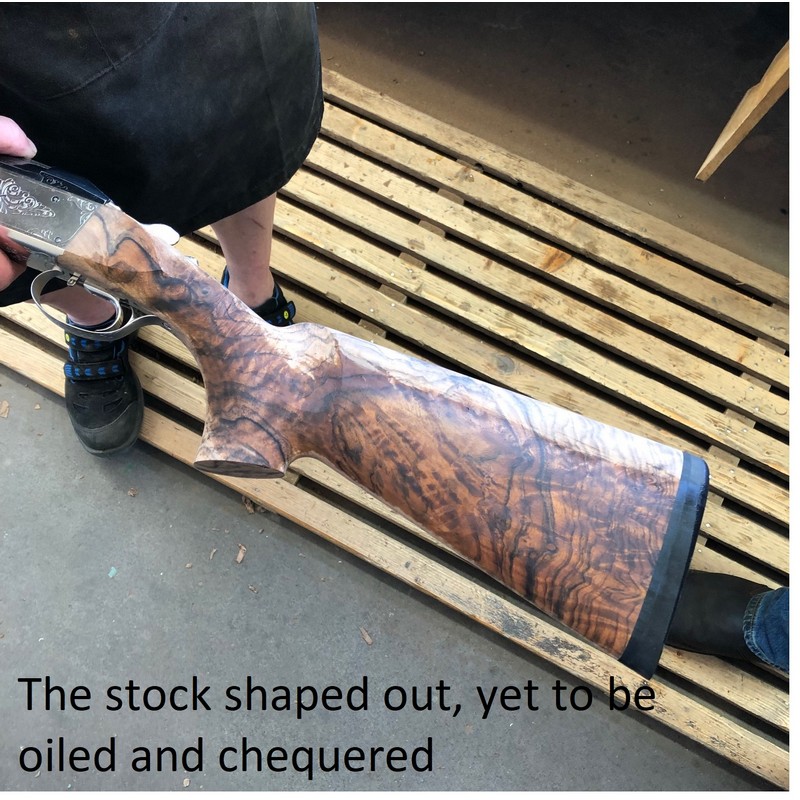 The next day we returned back to the factory at 1pm to be greeted by Maximillian, who took us up to see Ralf. Ralf said that he had been, at his work bench at 6am that morning to ensure the stock would be ready for us, and try to beat some of the midday heat. Again, Richard mounted the gun numerous times and with the guidance of Ralf altered the grip and palm swell to suit. We then went down once more into the basement to pattern test the gun where it seemed to be shooting a 60/40 pattern. This was something Richard was keen to achieve, after feeling his current stock is sometimes a little too high. Once we were satisfied at the factory Ralf suggested the next step would be to shoot the gun at some real clays. 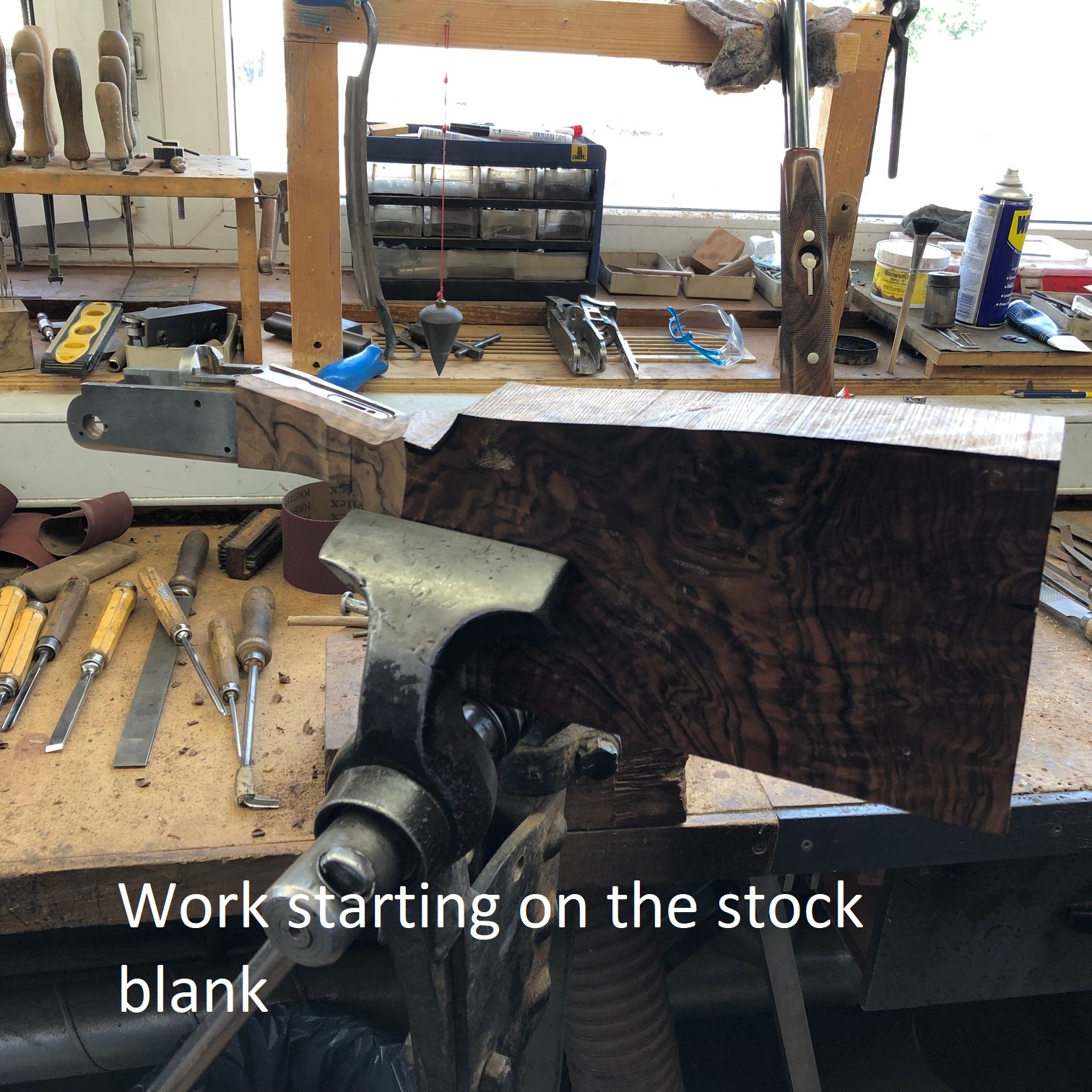 So, Ralf boxed up the Krieghoff try gun with Richards custom stock on, and after saying our goodbyes to Maximillian and the team, Ralf kindly took us in his car as we headed for the Mϋller shooting range, with German heavy metal playing on the stereo.

The Mϋller shooting centre (MSZU) is an amazing place visit, it has a huge retail area, café, indoor pistol, rifle ranges and an indoor clay pigeon shooting range. Krieghoff had pre-booked private range time for Richard to try out the custom stock, and as this facility is just 15 mins from Krieghoff HQ it is very convenient. 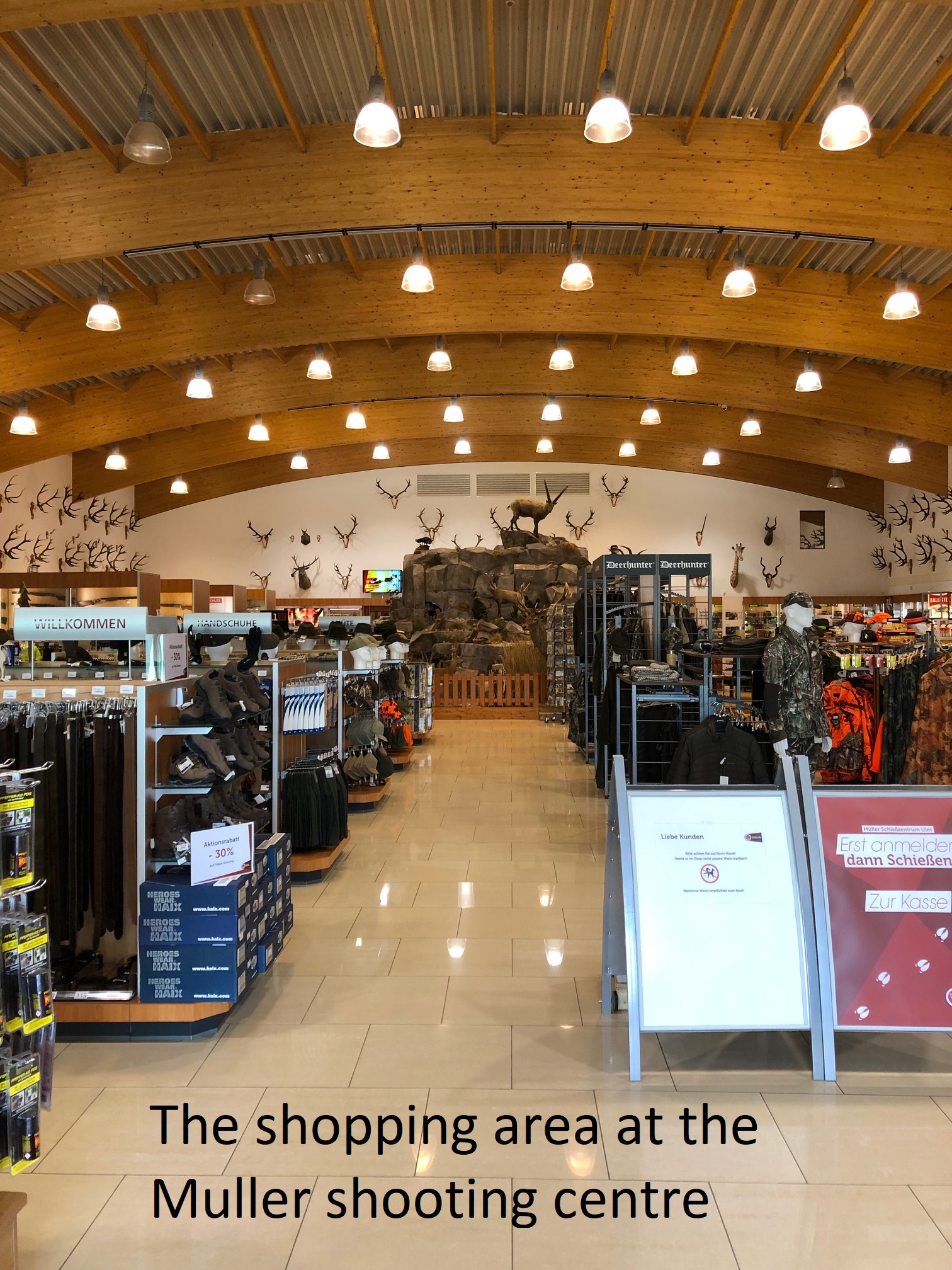 The range its self is a gigantic 3100 metres square hanger like building with 22-metre-high ceilings, it is well lit with the lights hidden so there’s no risk of shooting them or being blinded. The whole building is air-conditioned with, air extraction to remove the gun powder smoke. Inside there is a total of 31 traps comprising of a skeet layout, trap layout and various sporting targets. These sporting targets vary from rabbits, battues, loopers, overhead birds settling, springers and crossers. Everything you need to try your new custom made Krieghoff stock! 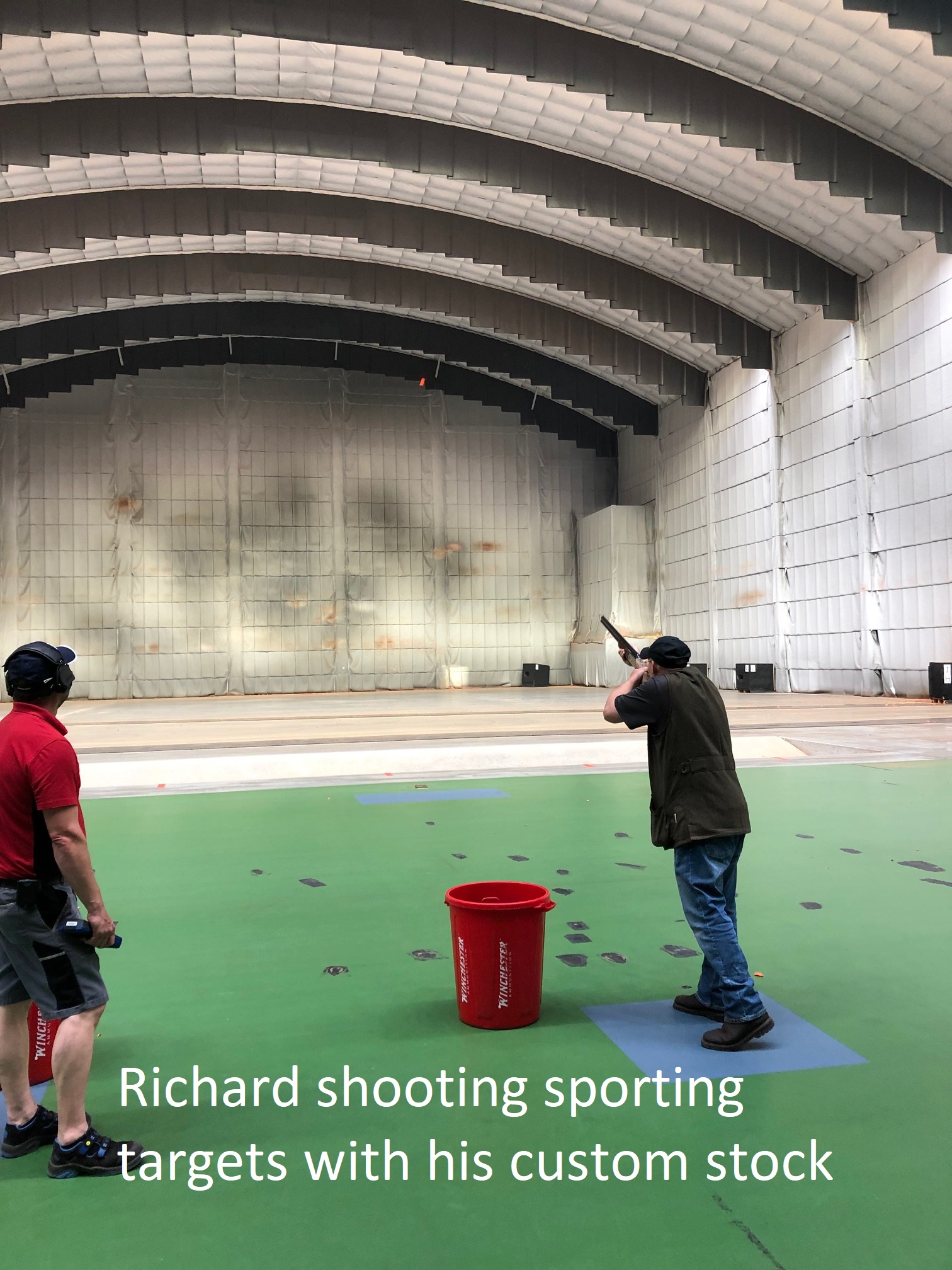 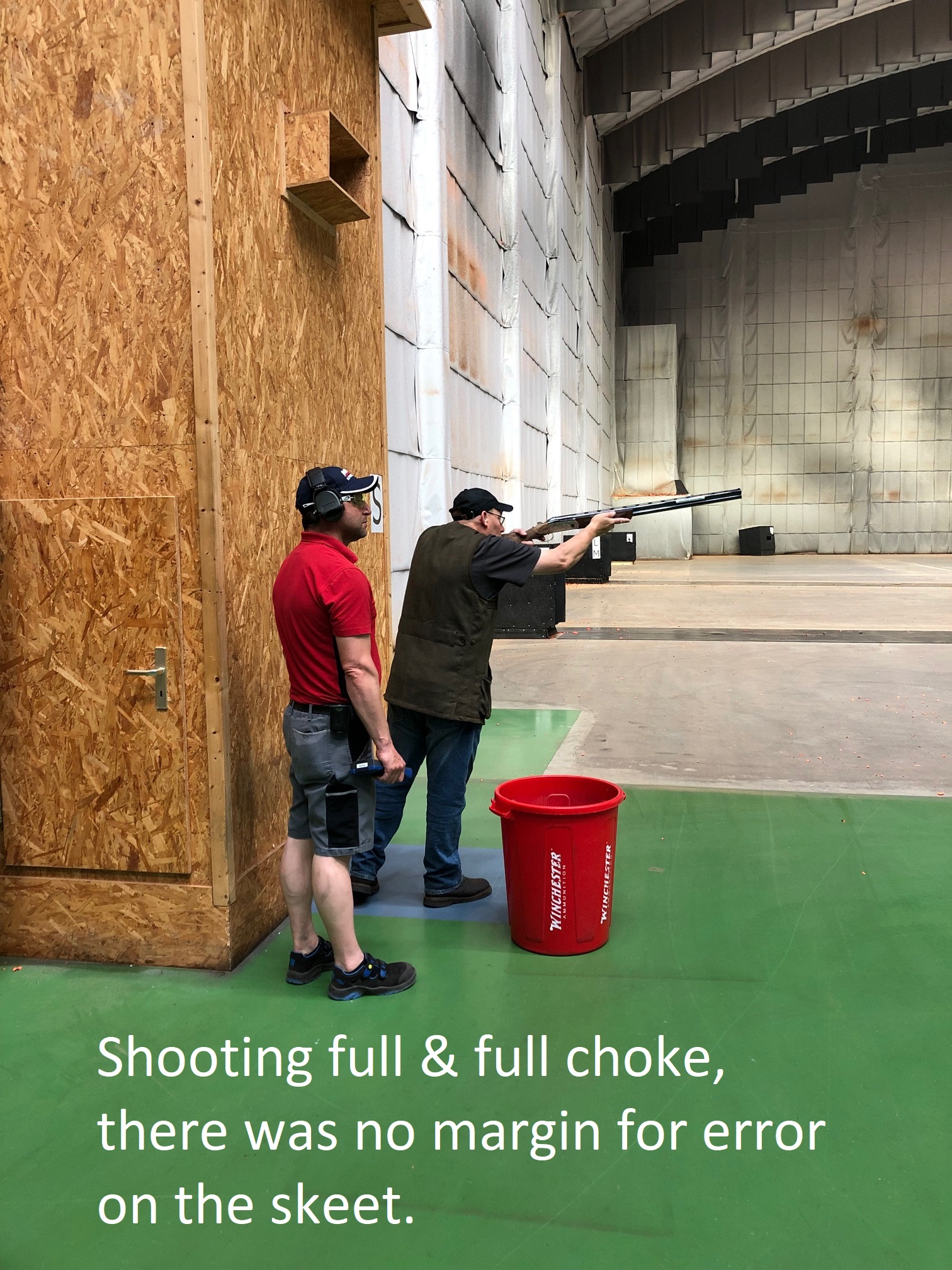 With Ralf on the buttons, Richard set away shooting the sporting targets and from the outset it was obvious that the stock fitted him perfectly. The try gun was fitted with full and full choke, Richard was using MSZU regulation cartridges, 24gram steel number 7 shot, so there was no room for error. The noise of the shots was loud and felt as though the sound echoed with nowhere to go, although it soon became regular and didn’t seem to put Richard off breaking target after target! All in all, Richard shot about 100-125 cartridges and we all felt this gave the stock the true test it needed. 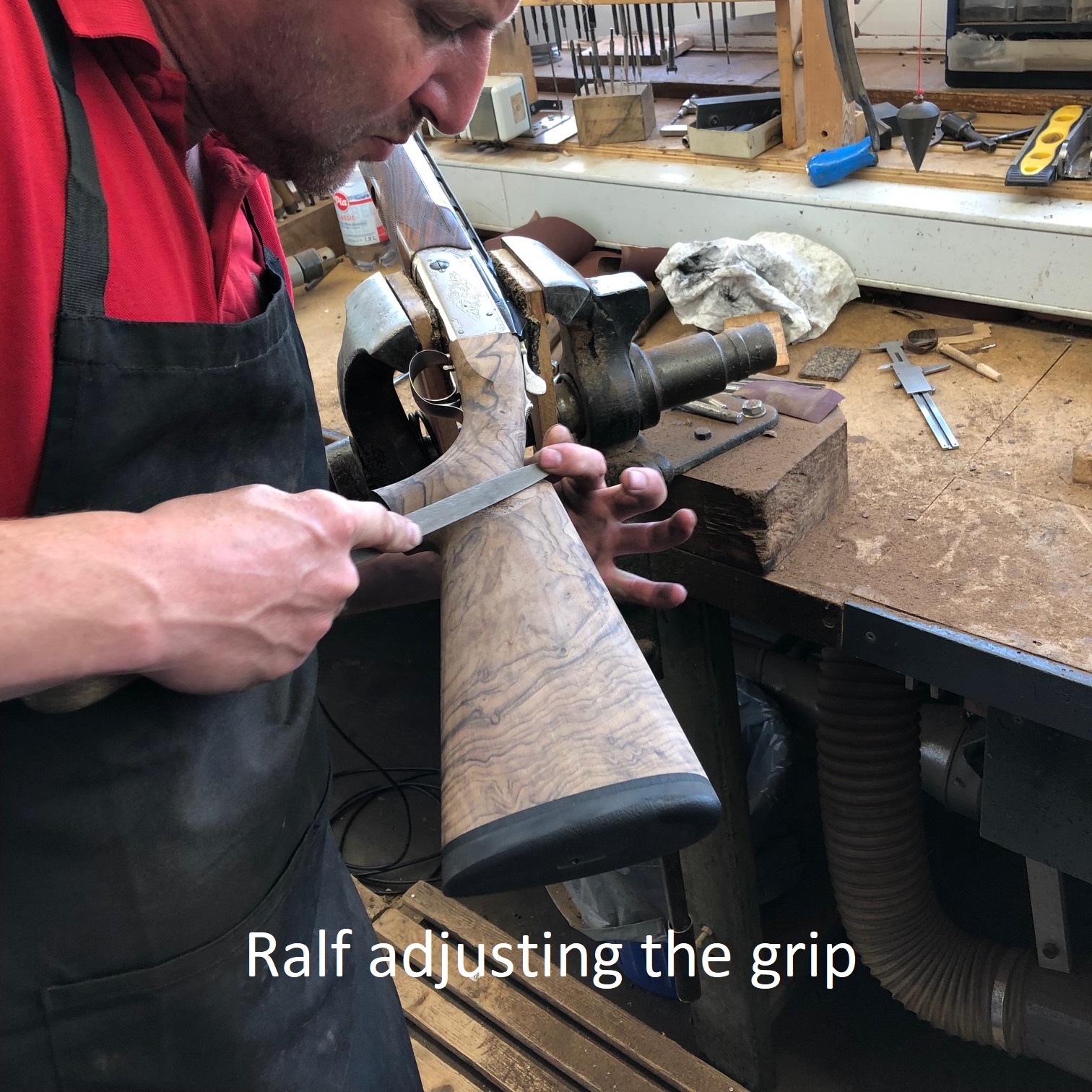 We said our goodbyes to Ralf and he said he would try his best to get the stock finished and oiled before the August shutdown. It will then get shipped to the UK to Alan Rhone and be assembled onto the beautifully engraved Renaissance action and Parcours barrels.

I cannot thank the Krieghoff team enough for their hospitably, advice and care during the visit, particularly Maximillian Imbach and Ralf Sommer, as well as Alan Rhone for booking trip for us.

If you are thinking of a new Krieghoff and would like more information on the trip then contact John Henry, 01670 787827 -John@bywellshootingground.co.uk